Campaign Creates Fantasy League Among Players in Drew Brees' Basement
READ THIS NEXT
Anheuser-Busch strikes deal with Travis Scott, and The Rock’s new tequila is on fire: Trending 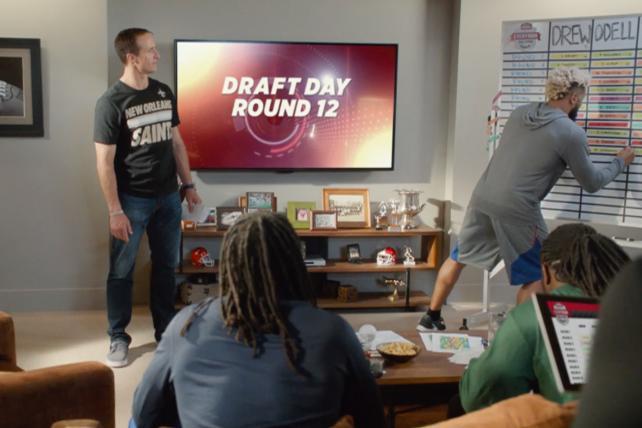 Campbell Soup Co. is stepping up its Chunky game by featuring National Football League stars drafting fictional everyday guys in their own twist on a fantasy league.

The campaign comes after Campbell CEO Denise Morrison admitted the company, well, dropped the ball when it came to Chunky earlier this year.

Ms. Morrison called out "marketing execution on the Chunky brand" as one of the issues in the soup business during a conference call in May and said the company was working on getting "our act together on Chunky."

On Monday, it begins airing a spot focused on the fictional draft in the "Everyman All-Star League."

Later commercials in the six-part story arc center on plots such as status reports and injuries, before a winner is named.

Chunky has been an NFL sponsor since 1997. Some of its best-known tie-ins were years of Mama's Boys commercials including players and sometimes their real moms. That campaign last appeared in 2014, featuring Richard Sherman and his mother, Beverly. This year, there are no plans for a Mama's Boys campaign. 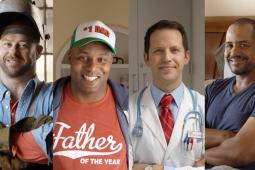 Instead, the "Everyman" campaign "takes a fresher look on our target and who they are now and it celebrates them," said Abby Elu, marketing manager for Campbell's Chunky Soup. "They're more active and carry a lot more responsibility than they necessarily get credit for."

The six players are shown gathering in Mr. Brees' basement, enjoying various Chunky soups as they draft everyday guys. Messrs. Ebron and Lacy did regional work on Chunky before, while the other four are newcomers to the brand.

"We wanted to pick guys that represented the goodness of our brand as well as of the target that they're there to celebrate," said Ms. Elu.

Campbell's U.S. soup sales fell 5% in the fiscal third quarter. Its sales of ready-to-serve soup, the category Chunky plays in, dropped a steeper 13%. Fiscal fourth-quarter results are due in early September.

Ms. Morrison has said the company's issue in U.S. soups is in ready-to-serve. "And I look at myself in the mirror on this one. It was bad execution on Chunky," she said in response to an analyst's question during the May call. "We had lack of compelling advertising. We didn't leverage our partnership well with the NFL. We had a label issue in the first quarter which cost us sales. But the good news is that these are all execution issues within our control and we are actively addressing them."

Two issues, in particular, hit Chunky. The company made changes including price adjustments and highlighting a Super Bowl 50 promotion on the front of the label, which made it difficult for people to find their favorite variety. Still, Chunky has annual retail sales of $488 million and is eaten by 25% of U.S. households, with consumption split roughly 60% male/40% female.

Ms. Elu declined to discuss spending on the campaign, but said "it's probably a slight increase over last year" that will "feel bigger" as the brand does more with its NFL relationship and is "going strong" with spending on ESPN, including an integration with the network's show "Love Hate." It is also stepping up its presence in social, doing contextual search inside sports-related content, getting back on radio and will do sampling at some NFL games and retailers.

Online, people can take a quiz and see their names added to a fictional roster with positions such as work week grinder. They can also enter a sweepstakes for chances to win prizes including Super Bowl tickets, signed "Everyman All-Star League" helmets and NFL Shop gift cards.

The brand is also introducing four new flavors, or "rookies for the 2016 season" as they have been described: Chili Mac, Creamy Chicken Noodle, Clam & Corn Chowder with Bacon and Spicy BBQ Seasoned Chicken with Beans.

Along with Y&R New York, Ms. Elu said Chunky is working with MEC on media, Edelman on public relations, Genesco Sports Enterprises on player and team relationships and the Mars Agency on shopper marketing.