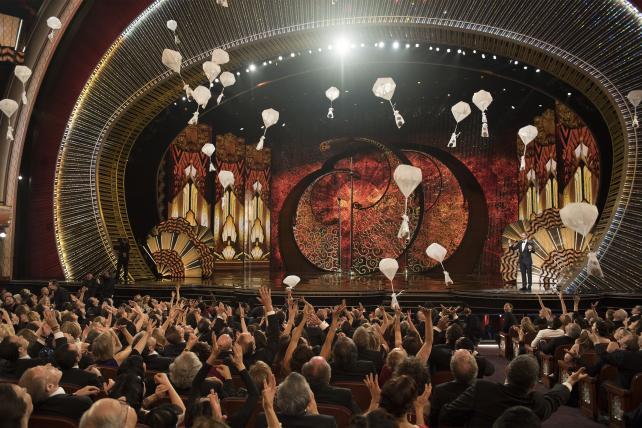 The Academy Awards gave four candy brands chances to shine as confections rained from the ceiling on Sunday to the delight of hungry audience members, the second consecutive year in which sweet treats had an Oscar moment.

Red Vines, Junior Mints, Lemonhead and Mike and Ike were featured in skits in which small white parachutes filled with candy floated down to the audience.

It appears that all four brands, marketed by four different candy makers, were not aware they would be part of the Oscars until the moments happened. The unpaid placements came as advertisers were said to pay $2 million for 30-second spots during the show. The companies' varied reactions suggest some were prepared to post on social media Sunday night, while at least one brand is taking its time to share its broader message.

Red Vines and Junior Mints were featured first, when host Jimmy Kimmel announced a special delivery and white parachutes fell to the crowd. Later, Mr. Kimmel had a brief conversation with "Lion" star Sunny Pawar in which he asked the young actor "Which one do you like better, the Red Vines or the other one?" Mr. Pawar's reply: "Any one." Then they recreated a prideful scene from "The Lion King" as a candy announcement. Mr. Kimmel lifted Mr. Pawar up and the young actor shouted "Lemonheads and Mike and Ikes!" Mr. Kimmel repeated the brand names and the next batch of candy made its way to the stars.

Just Born Quality Confections, which makes Mike and Ike, said it was not aware its candy would be part of the show.

"We love when our brands are mentioned in connection with largescale events like the Oscars and were just as excited as the celebrities in the audience when Mike and Ike came raining down on them," Just Born VP-Marketing Matt Pye said in a statement.

Jill Manchester, SVP-marketing for Ferrara Candy Co., which makes Lemonhead, also said the placement was completely unexpected. "It was not planned, it was a surprise for us also," said Ms. Manchester. "We were as surprised as everybody else."

For now, Ferrara has opted to respond one-on-one to Lemonhead fans who reached out about the moment, she said. The brand has not posted anything widely as of Monday afternoon on social channels such as Twitter, Facebook or Instagram, where it has not been active in recent months. There is a chance the brand may do more social outreach tied to when people go to the movies, Ms. Manchester said.

Lemonhead continued to sit out the social media moment on Monday afternoon, as shown by its lastest tweet and Facebook post from 2015. But its partner in the second drop went so far as to suggest a new award show mix with a post that came together with help from Coyne Public Relations.

Representatives for Red Vines, made by American Licorice Co. and Junior Mints, from Tootsie Roll Industries Inc.; did not immediately respond to requests for comment.

Based on the credits that ran at the end of the telecast, the only brand mentioned for providing promotional consideration was Samsung. Show organizers could not be reached for comment.

After their moments, most of the marketers made some comments on social media, such as these responses from Red Vines on Twitter and Facebook.

Before its new candy suggestion, Mike and Ike tweeted about its moment soon after it happened.

There was also a drop delivery of cookies and doughnuts later during the show, but those baked goods were not announced by their brand names.

Junior Mints tried to make the most of its moment with a series of tweets and retweets including one from Access Hollywood showing Meryl Streep and her husband Don Grummer sharing the candy.