The chain says it will support work on education, homelessness and hunger, and may still fund faith-based organizations
READ THIS NEXT
How COVID-19 is changing shopping behavior on a global scale 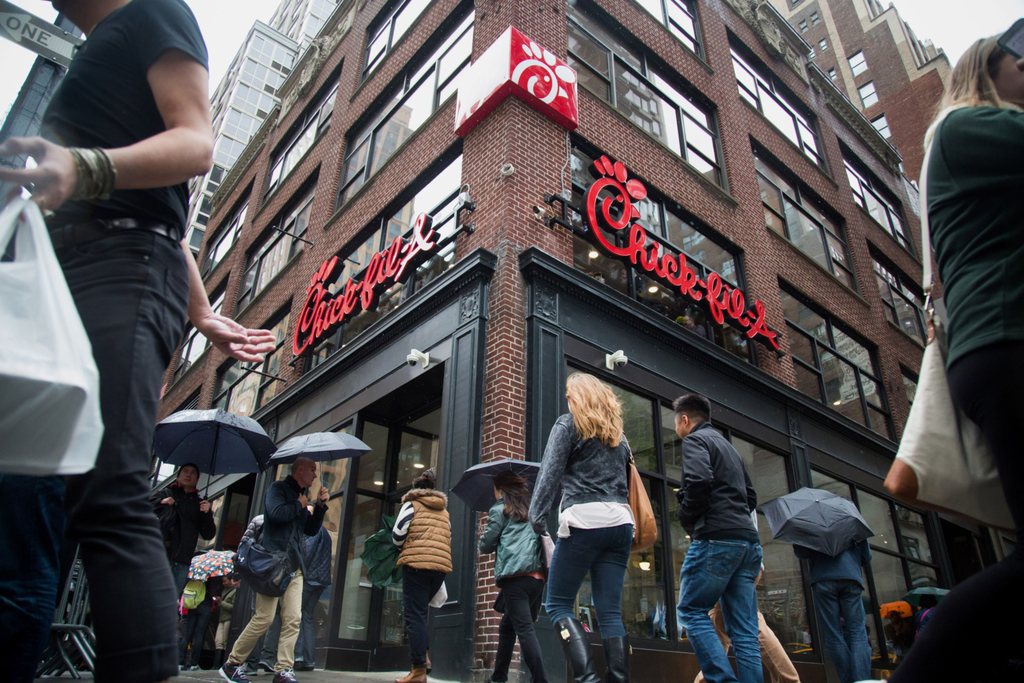 Pedestrians walk past a Chick-fil-A restaurant in New York

Chick-fil-A says it is no longer donating money to two Christian-affiliated groups that have faced criticism for their stance on LGBTQ+ rights.

The nation’s leading chicken chain has faced pressure, including protests outside of new locations, for its funding of Christian organizations and its CEO’s denouncement of same-sex marriage.

Now, Chick-fil-A is offering up details about its corporate giving through its Chick-fil-A Foundation, a non-profit organization it started in 2012. The company is narrowing the focus of its giving to three areas—initiatives focused on homelessness, hunger and education. Chick-fil-A also said it would no longer make multiyear commitments and plans to reassess its partnerships annually.

“This decision was made to create more clarity—and to better address three critical needs facing children across the communities Chick-fil-A serves,” the company says.

On Monday, Chick-fil-A announced that its Chick-fil-A Foundation did not give money to the Fellowship of Christian Athletes or The Salvation Army in 2019, after supporting both groups in 2018 as part of multiyear commitments it says were fulfilled in 2018.

“We have tried to be as transparent as possible on who we give to and why we give, which we commit to continuing to do,” Rodney Bullard, VP of corporate social responsibility at Chick-fil-A and executive director of the Chick-fil-A Foundation, said in a post on the foundation’s site.

Still, Chick-fil-A declined to say whether anything, in particular, prompted Monday’s announcement. It also didn’t comment on whether it consulted with any LGBTQ+-affiliated groups as part of its planning process for 2020 donations, or whether it would no longer support the Fellowship of Christian Athletes or The Salvation Army in the future.

Lest people suggest the moves are a public relations ploy laid out to improve the brand’s image as rival Popeyes draws diners with its new chicken sandwich, the details announced Monday show that Chick-fil-A’s donations changed months before that sandwich’s August debut.

Charles M. Blow, a New York Times Op-Ed columnist, was one of many who commented about the move on Twitter.

. @PopeyesChicken put the squeeze on you with that chicken sandwich, now you’re desperate for more market share. We see you @ChickfilA… https://t.co/Bb2okjvA2N

In Aug 2012, I coordinated a national @ChickfilA Appreciation Day after they were being bullied by militant hate groups. Millions showed up. Today, @ChickfilA betrayed loyal customers for $$. I regret believing they would stay true to convictions of founder Truett Cathey. Sad.

In 2012, Chick-fil-A found itself in a PR crisis after CEO Dan Cathy, a son of founder S. Truett Cathy, said he supports “the biblical definition of the family unit,” in an interview with the Baptist Press.

In the past, Chick-fil-A and its founder, who died in 2014, donated to some Christian organizations. The Fellowship of Christian Athletes has a statement of faith that includes, “we believe that marriage is exclusively the union of one man and one woman.” The Salvation Army has faced questions about its stance on gay rights, though it says it serves the LGTBQ+ community.

Chick-fil-A, which is famously closed on Sundays, may still support faith-based organizations. “These partners could include faith-based and non-faith-based charities,” the company said in a blog post.

Chick-fil-A says the $1.65 million it gave to the Fellowship of Christian Athletes organization in 2018 went to provide summer sports camps at historically black colleges and universities, and that students participating in those programs do not need to be members of the group or sign any pledge. Its $115,000 donation to The Salvation Army in 2018 was for a program that provides gifts for children during the holidays, Chick-fil-A said.

The announcement of the 2018 donations, 2019 giving year-to-date and organizations it plans to support in 2020 comes a month after a mall operator in the United Kingdom said it would not renew the chain’s new lease after LGBTQ+ rights groups protested upon its opening. Still, the company said sales at that location exceeded its expectations.

Chick-fil-A outlined the foundation's giving plans for 2020, which include expanding partnerships with Junior Achievement USA and Covenant House International and dedicating $25,000 to a local food bank at each new Chick-fil-A opening.

“Our goal is to donate to the most effective organizations in the areas of education, homelessness and hunger,” Tim Tassopoulos, president and COO of Chick-fil-A Inc., said in a statement. “No organization will be excluded from future consideration—faith-based or non-faith-based.”