Company Discusses Food Safety, Plans to Support Small Farmers
READ THIS NEXT
Cream of Wheat plans to remove the Black chef image from its packaging

Chipotle Mexican Grill made some public splashes during its company-wide meeting Monday, first offering rainchecks for free meals and then announcing a new local growers support plan via Periscope.

The once high-flying burrito chain is trying to move on after a string of food safety issues, including E.coli and norovirus hit the company, its sales and its stock price in recent months. 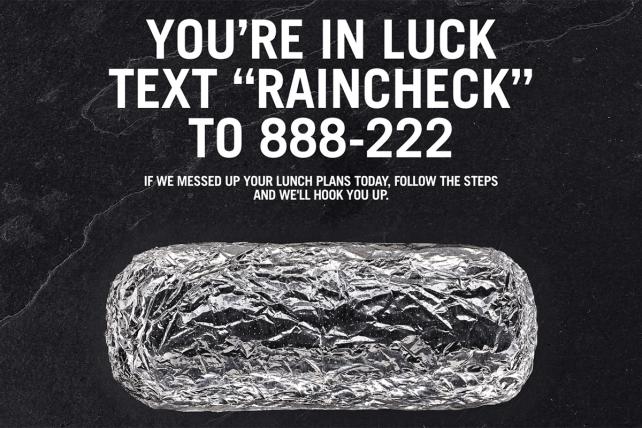 Chipotle had been planning its Feb. 8 private company meeting for weeks, which also meant closing down its restaurants until 3 p.m. local time on Monday. It also previously said promotions and coupons could be part of its comeback plans. On Monday it combined the two ideas, offering patrons who participated in a text offer a chance to score a raincheck code good for one free burrito, burrito bowl, salad or an order of tacos.

The meeting was held days after the company said the Centers for Disease Control and Prevention had concluded its E.coli investigation. Though the meeting ended at around 12:30 p.m. ET, the company will not be serving lunch on Monday, with plans to stay closed until 3 p.m.

During the event, which was largely closed to the press and public, Chipotle aired a livestream on Periscope to show Co-CEO Monty Moran announcing plans to spend up to $10 million to support local farmers who might not be able to meet its new food safety standards.

"It's important to us to support small- and medium-sized farmers whenever we can. However, it may be difficult for some of our small suppliers to meet our new food safety standards. But we're there ready to help them," Mr. Moran said.

The funds could be used for safety support and education on the new standards, as well as to offset the cost of some of the new testing that is being put in place, he said.

For now, the rest of the meeting remains under wraps, though the company did issue some tweets during the event. Many of the comments in the tweets echoed ideas that had already been shared with Wall Street in recent presentations.

Shares of Chipotle fell 3.5% to $444 early on Monday afternoon. The stock had traded above $750 in October, before the food safety issues drew headlines. Chipotle's fourth-quarter sales at longstanding locations fell 14.6% following the food-borne illness reports, which attracted attention in early November.

Here are a few of Monday's tweets:

Steve: Deeply sorry that some people became ill after eating Chipotle. Committed to make sure it won't happen again. #ChipotleAllTeam

Monty reviews in-restaurant safety measures: Blanching of veggies kills germs on the outside of the ingredients. #ChipotleAllTeam

Meanwhile, smaller rival Moe's Southwest Grill appeared to poke fun at its competitor's closure on Monday with a song played by a guy in a burrito costume, repeatedly singing "we're open all day, February 8th."