A Funny Thing Happened On the Way To the Focus Group

Millward Brown Teams With Second City In Search of Consumer Truths
READ THIS NEXT
The Week Ahead: Advertising Week Europe is back and ANA hosts in-house agency event
Advertising Age Player

Legendary humorist Sid Caesar said comedy has to be based on truth. Funnily enough, it's also a prerequisite for consumer research. So why not mingle the two?

That's precisely what Millward Brown is doing with "Consumer Theater," a new program from the WPP company and comedy troupe Second City that injects laughter into the serious business of consumer research in search of honest feedback and creative ideas.

Improvisational actors portray scenes based on the feedback that a panel of consumers gives to brand concepts sourced from marketers. The idea is that consumers will be more open and truthful when they are laughing and interacting with actors in a theater, rather than confined to a sterile conference room.

"There is a fearlessness that exists with consumers in this environment because we've made it O.K. for them to say whatever," said Cheryl Stallworth-Hooper, CEO of Millward Brown's Firefly unit, which handles qualitative research.

"Things are funny when they are true," added Tom Yorton, CEO of Second City Works, the business-to-business arm of the theater that provides services to corporations on topics ranging from leadership development to marketing and content. "We find this is a great way to get to those kernels of truth, of what people really feel about different topics. It engages the brain differently."

Show and tell
While the concept makes sense, the process is a little hard to grasp, especially when described in a sales brochure. So on a recent day at a Second City theater in Chicago, the two organizations put on a show-and-tell, giving targeted companies and ad agencies a three-hour demonstration. Invited guests came from PepsiCo, MillerCoors, Kimberly-Clark and other companies. Agencies such as WPP's Team Detroit, Energy BBDO and Y&R were represented.

The demo used a hypothetical marketing scenario that seemed real-world worthy: How should an automotive company pitch a driverless car to potential buyers?

The session was led by Patty Bloomfield, a Firefly Millward Brown managing director, and Andy Eninger, a Second City creative director. Together, they questioned a panel of roughly a dozen consumers who sat in the front rows of the theater. The consumers were asked about the upsides and downsides of driverless cars in a process similar to a regular focus group.

Then came the twist: A four-person Second City ensemble put on improvised skits in response to the consumer feedback. And then consumers were quizzed on their reactions to the skits.

At one point the actors left the stage to individually quiz the consumers in the audience. The actors then disappeared backstage to brainstorm on skits. They reappeared a short time later and put on a quick show that had the trappings of a regular Second City improv act, including tunes by a Second City musical director.

Driverless cars
One of the positive themes that emerged from the consumer feedback is that people in driverless cars would be freed to simply watch the world go by, rather than dodging traffic or kids playing in the street. And so one of the skits (at top) played off that concept. 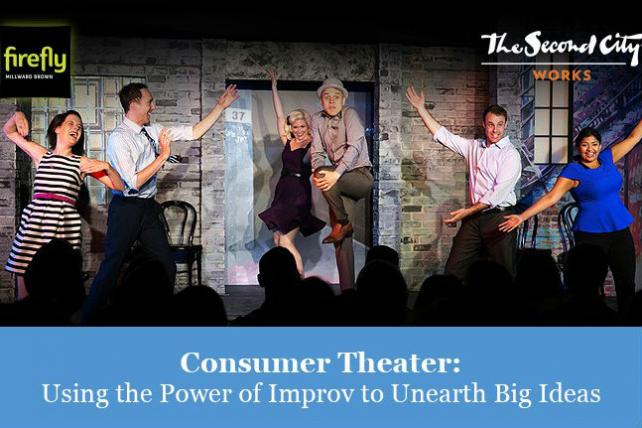 Another skit imagined a therapy session for people who would be rendered unemployed by a driverless car society, including a person in charge of developing photos from red-light cameras.

The skits were far from finished ads. But that is not the point. Rather, the aim is to develop early-stage creative concepts based on real-time consumer feedback. The program is based on the improv philosophy of "yes, and …" in which one idea grows into another idea, and so on. The actors serve as a "living, breathing stimulus" to "break down barriers by using empathy and humor," according to a program brochure.

Humor "is very disarming," Ms. Bloomfield said. It "allows people to open up in ways that they might not have opened up before."

And the laughs aren't cheap: A Consumer Theater session costs in the range of $60,000 to $65,000. By comparison, according to Athena Brand Wisdom's online Focus Group Cost Calculator, a single focus group in a single city costs about $11,900 exlusive of client travel or meals.

'Spark session'
The program includes a "spark session" during which the Second City/Millward Brown team works with clients to document insights generated by the skits and consumer reactions. This occurs after the consumer panel exits the theater. During the recent demo, potential clients used this time to give feedback on the overall program.

Most people in attendance seemed to be buying the concept. Several people remarked about how engaged the consumer panel was.

"I don't see these as a replacement for focus groups," one man said. "Focus groups are a great way to get people to respond back to us. But here they are actually creating ideas. We gave them barely nothing and they gave us so much."