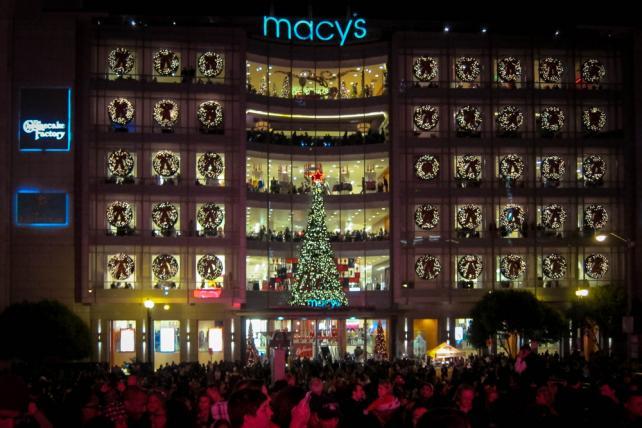 More than 103 million people shopped online over the four-day weekend, which started Thursday on Thanksgiving and continued with Black Friday, according to an annual survey commissioned by the National Retail Federation. That compares with fewer than 102 million who ventured into traditional stores, the trade group said.

The shift online has been a mixed blessing for the retail industry. While it's given companies one more way to reach consumers, a slowdown in mall traffic has hurt results at department stores and apparel chains. Many retailers also have struggled to match the online dexterity of Amazon. Neiman Marcus Group, for instance, suffered Web outages on Friday and Saturday, leaving customers frustrated.

"Thanksgiving has established itself as one of the more important online buying days, while Black Friday continues to gain in importance online with each passing year," Gian Fulgoni, chairman emeritus of research firm ComScore, said in a report on Sunday. His company saw e-commerce sales jump 9% on Thanksgiving and 10% the following day.

ShopperTrak, another researcher, said that brick-and-mortar retailers' sales decreased versus last year. They brought in $12.1 billion during Thanksgiving and Black Friday, the firm said.

The growth of e-commerce -- including people using their smartphones to buy gifts -- helped boost the total number of U.S. shoppers to more than 151 million over the weekend, according to the NRF. That figure, which accounts for the overlap between online and offline buyers, topped the 136 million that the trade group had predicted. Other factors, including an earlier rollout of holiday promotions, also are changing consumers' behavior, NRF President Matthew Shay said in a statement.

The industry is seeing "an evolutionary change in holiday shopping by both consumers and retailers," Mr. Shay said.

Still, it's hard to tell if consumers are spending as much as they once did. The average shopper shelled out $299.60 over the weekend, said the NRF, which commissioned Prosper Insights & Analytics to conduct the survey. But a change in methodology means that figure isn't comparable to those from prior years. It had been $380.95 in 2014's Black Friday weekend and $407.02 the year before.

The NRF also didn't provide a total spending amount, something it included in past surveys. That figure had been down for two straight years, dropping 11% to $50.9 billion in 2014.

The change in methodology made it difficult to tell if this is the first year that online shoppers exceeded the offline total. Most consumer spending -- whether it's groceries or cars -- remains solidly at brick-and-mortar locations. But given the faster growth rates in e-commerce sales, the retail industry appears to be reaching a turning point.

The ritual of Black Friday -- the post-Thanksgiving day that has long marked the beginning of the holiday season -- also has changed. Frenzied consumers still line up in front of stores to take advantage of deals on toys and televisions, but crowds were smaller at many U.S. malls Friday. The event is also seen as an opportunity for window shopping, rather than spending.

As more shopping shifts to the web, Wal-Mart Stores, Target and other traditional retailers are doing their best to ward off the e-commerce king: Amazon. Target plans to offer free shipping on online orders this holiday season for the second year in a row. Wal-mart, meanwhile, is encouraging e- commerce shoppers to take advantage of in-store pickup, an attempt to leverage its more than 4,600 U.S. locations.

The NRF predicts 121 million people will shop online Monday, fewer than 126.9 million who planned to do so last year.

The trade association expects total holiday sales to increase 3.7% in November and December from a year earlier. That's a slowdown from last year's 4.1% gain, but above the 2.5% average over the past 10 years. Mr. Shay said on a conference call Sunday that the industry should still be able to hit that sales growth target. "We think we are in a very good place," he said.