Since James Quincey took over as Coca-Cola Co. CEO in May, the company in earnings calls and investor presentations has been selling itself as a "total beverage company" with a product portfolio that goes beyond its namesake cola brand. On Sunday night, the marketer will bring that message to a national audience with a TV ad that is part of a new corporate branding campaign.

The spot, airing during NBC's "Sunday Night Football" broadcast, seeks to reintroduce the beverage giant to Americans as the company completes a decade-long refranchising initiative that returns ownership of local bottlers to independent companies. In doing so, Coke sold off capital-intensive manufacturing and distribution operations as it evolves into a company with a central focus on marketing and innovation.

The new campaign seeks to portray the 68 independent U.S. Coca-Cola bottlers as part of the company's broader family with deep connections in local communities. Ads began running locally earlier this month. Sunday night's TV ad begins a national push that also includes ads in USA Today and the Wall Street Journal. Agencies on the effort include Partners & Spade for creative, Perfect Sense Digital on digital and UM for media buying.

The TV spot describes the Coca-Cola Company as making "more than our name suggests." It shows various brands including Honest Tea, Odwalla juice and Smartwater. The ad features a Coke delivery driver named Willie Mua who works for a bottler in Alaska and Jon Radtke, Coca-Cola North America's hydrologist who's charged with managing the company's water sustainability program. 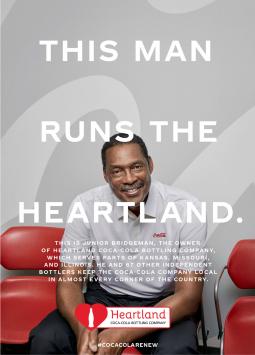 The campaign will continue to get a local media focus. For instance, one print ad features Junior Bridgeman, a former pro basketball player who owns a Coke bottler serving parts of Kansas, Missouri and Illinois.

"The increasingly local nature of our bottling system positions us to make an even bigger impact on the communities where we live, work and play," Stuart Kronauge, senior VP of marketing and president of USA operations for Coca-Cola North America, states in a corporate blog post. "This is the perfect time to reintroduce ourselves as a leading employer and supplier and communicate the breadth of who we are, what we stand for, and what we make and sell."

Globally, carbonated beverages still account for 70% of Coca-Cola's business, according to a spokeswoman. At an investors conference earlier this year, Quincey said, "The brand Coca-Cola will always be the heart and soul of the Coca-Cola Company, but the company has outgrown its core brand. The company needs to be bigger than our core brand."