What does it take to craft a song that will be performed on a top TV singing competition? At least 4,200 people and eight marketing agencies. 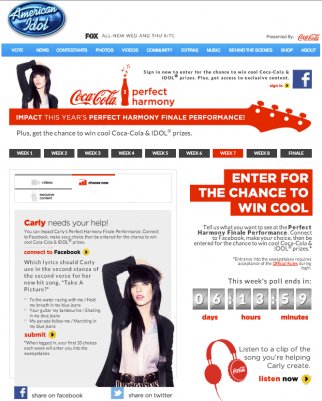 When Carly Rae Jepsen steps out on the "American Idol" stage for the Season 12 finale May 15, she will be performing a song crowdsourced via Coca-Cola's "Perfect Harmony" program. Over an eight-week period, fans of the brand and the singer helped direct everything about the performance of "Take A Picture" from the lyrics to the theme (photo shoot) to stage effects (pyrotechnics) to attire of the background dancers (glam sparkle.) They weighed in using a website and via Twitter and a Facebook page -- the last of which registered 4,200 monthly active users.

Though Perfect Harmony is in its third year, Andy McMillin, Coke VP-trademark, said "consumer engagement has blown up" this time around, with a 34% incease over last year as measured by site visits and votes. Last year, Coke asked viewers to vote on lyrics for a Jason Derulo song, but this year the company upped the ante with "more opportunities [for fans] to craft the experience," which Mr. McMillan credits for the rise in engagement.

It took several agencies to put together the various elements, which include a sweepstakes to win tickets to the "Idol" finale and a giveaway of 20,000 free downloads of the song using an under-the-cap code to qualify.

Mr. McMillin noted that "Perfect Harmony" isn't tied in with Coke's recent "Ahh" push, but he said "they are both in the same strategic space of trying to find mobile and digital ways to engage with teens," and at some point it will be connected back to the "Ahh" platform.

The "Call Me Maybe" artist was logical because she is popular among teens, has a strong social-media presence (6.4 million Twitter followers) and a hit that went viral. She is also signed to Interscope Records, run by Jimmy Iovine, who is an on-air advisor to contestants on the show.

And what does Coke have to say about the free-falling ratings of "American Idol," a TV franchise it's supported from the first season? "We've had a strong relationship with 'Idol" for 12 years and it remains one of the highest-rated shows for teens and moms," said Mr. McMillian.