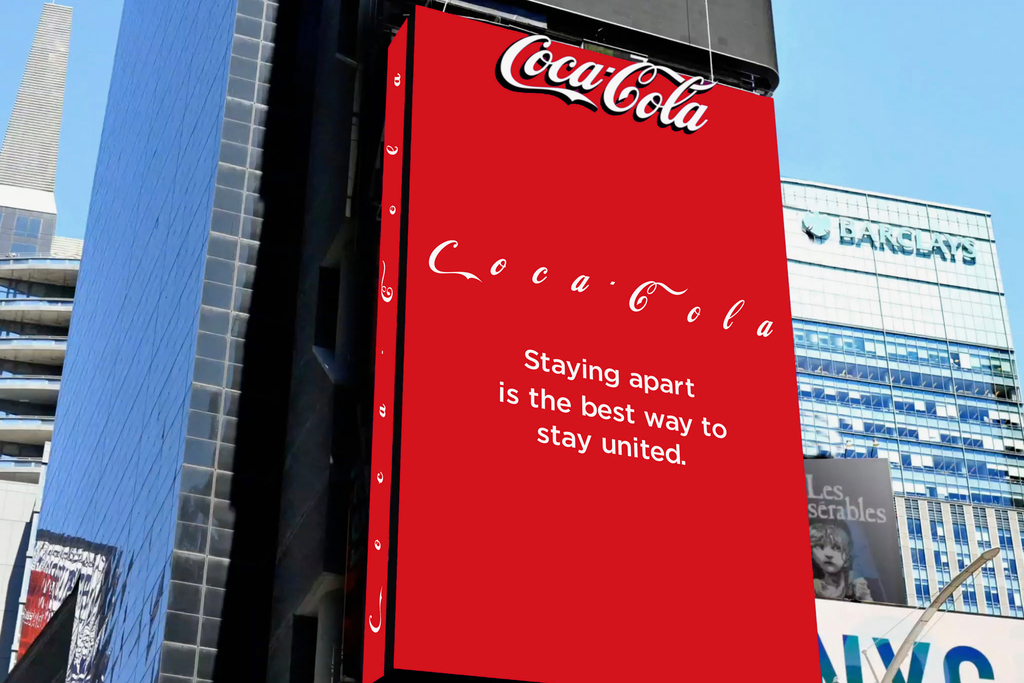 Coca-Cola has chosen what is normally one of the most crowded places on Earth to send a social distancing message as the coronavirus outbreak continues to spread.

The beverage marketer on Sunday began running an ad on its Times Square billboard that features its brand name—normally written in tightly connected Spencerian script—with space between each letter. Underneath is the message, “Staying apart is the best way to stay connected.”

The ad, which is from Mercardo McCann, will only run on Times Square in the U.S., a Coke spokeswoman confirmed. “It’s one of our most iconic pieces of out-of-home that we could turn over to help get the message out,” she said. Of course, Times Square is a shadow of its normally bustling self with New Yorkers hunkered down in their homes and tourism at a near standstill.

Coke’s social distance-influenced logo is reminiscent of an image put out last week by McDonald’s Brazilian unit that shows the iconic Golden Arches separated by space. The image, which is from the agency DPZ&T, was featured on the brand’s social accounts, including Instagram, Facebook and Twitter. It has been met with criticism, with some people painting it as an opportunistic, awards-baiting move.

The backlash shows that brands must be careful as they roll out new work that, however well-intentioned, risks being viewed as exploitive. Still, with the pandemic dominating the news, regular advertising might not cut it either. In a report issued last week, Ace Metrix—which scores ads using a panel of 500 viewers—stated that it is “key for brands to show actual action, not just words” with 75 percent of its respondents saying brands have a responsibility to help out during the pandemic.

On that front, Coke through its Coca-Cola Foundation is pledging to donate a total of  $13.5 million in grants to five non-profit organizations in U.S. and Canada that are involved in the humanitarian response to the pandemic. They include: Feeding America; Boys & Girls Clubs of America and Canada; Food Banks Canada; and Center for Disaster Philanthropy.