Coke Weighs in on Racial Relations Debate With Unity Ad

A Full-Page Ad Declares 'We Live as Many. We Stand as One.'
READ THIS NEXT
A regularly updated list tracking marketers’ response to coronavirus 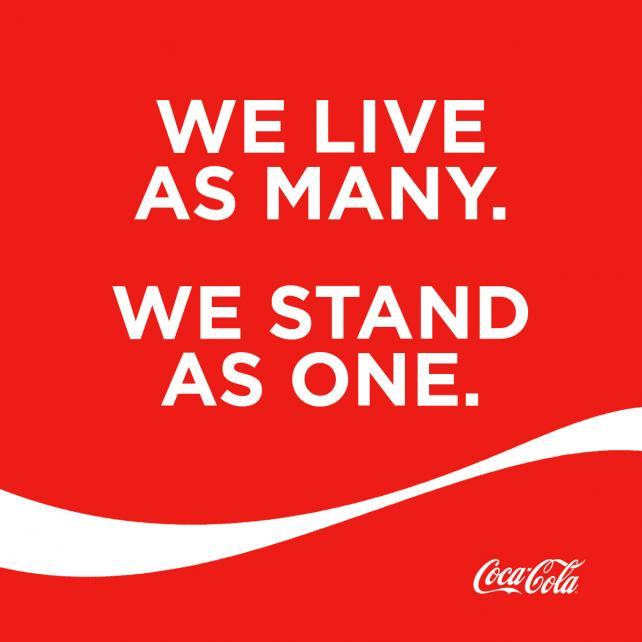 Coca-Cola today took a stab at joining America's rising conversation on race relations with an ad that sought to link the brand with optimism and inclusion.

A full-page ad running in USA Today stated: "We live as many. We stand as one," against the brand's familiar red backdrop and white ribbon. Coke is also running the spot across its national network of digital billboards, including in Times Square. The marketer also put the ad across its own social channels, including its Facebook page, where it generated the usual fierce debate that comes whenever brands tackle social issues. The ad was done in-house and will run today through Sunday, a Coke spokeswoman confirmed. She also confirmed that it was made in response to the racial relations debate that is occurring in the wake of the high-profile killings of two black men by law enforcement and the deadly attack on police officers in Dallas.

"Throughout the history of Coca-Cola, we have stood for optimism, diversity and inclusion. Deep in our heritage is a commitment to bringing people and communities together to find common ground," she said in an email. "Today, we shared a message of unity on our digital and social networks: 'We live as many. We stand as one.' This represents an idea we hope everyone can embrace."

But not everyone is embracing it on social media. It got a mixed reaction on Facebook, drawing 250 comments within six hours. Here is a sample of the feedback: