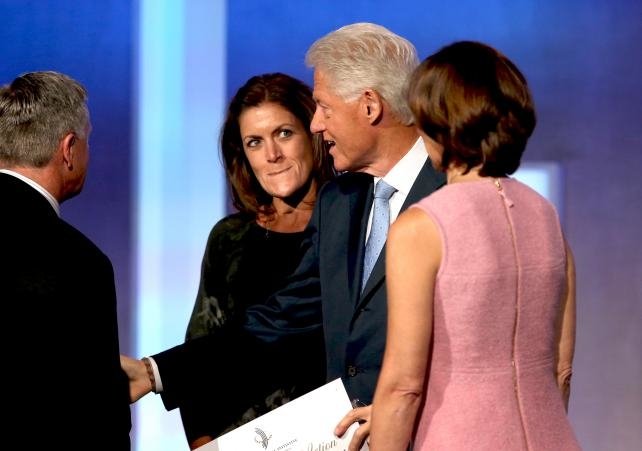 Trade publication Beverage Digest reported in a tweet that "several sources" say Ms. Clark is leaving to work for Ms. Clinton. Coca-Cola declined comment to comment on where Ms. Clark is headed and Ms. Clark did not immediately respond to an email for comment.

Ms. Clark, who is the company's president-sparkling and strategic marketing in North America, sent a memo to her team in which she stated that "I have a passion project that I have an opportunity to pursue during that time. It's not with another company or for-profit brand, it's truly something I believe in and a once-in-a-lifetime opportunity to work on something that I think can change the world."

In a statement, Coca-Cola said: "Wendy Clark has chosen to take an unpaid leave of absence until March 31 to support an outside project of personal importance to her. During this time her team will report directly to Sandy Douglas, president of Coca-Cola North America. The company is supportive of her taking this time off to pursue a personal passion and we look forward to welcoming her back after this short leave."

Ms. Clark is a fan of Ms. Clinton's, judging by this recent tweet:

Yes, actually, I am. #ready pic.twitter.com/kC9hYRhRTF


The move comes as the company enters a critical period as it tries to rejuvenate sluggish sales by plowing cost savings back into marketing. The company this week announced that it was eliminating 1,600-1,800 positions in corporate, Coca-Cola North America and Coca-Cola International. At the same time, Coca -Cola plans to make a $250 million to $350 million incremental media investment globally in 2015.

In her memo, Ms. Clark said that "in my absence, I have infinite confidence in our team and our plans." A Coca-Cola spokesman said that the company's first quarter initiates are already planned and under way.

Here is the full memo that Ms. Clark sent her team:

I hope everyone had a restful and enjoyable holiday break.

Our teams delivered strong thinking and execution and while we can't talk publicly about Q4 results, we should all be very proud of our contributions and impact.

Thanks to everyone for all that you've done.

And now it's 2015 and we have exciting plans for another great year and work already underway and in the marketplace across all of our brands. We're counting on you to deliver these plans and work with your amazing passion and execution.

With this in mind, I wanted to give everyone a quick, personal update on news around me.

In our Q4 All Hands meeting we celebrated Maya Angelou's quote: "I believe that the most important single thing, beyond discipline and creativity, is daring to dare."

In all of our All Hands meetings this year we have anchored on leadership traits of being Brave, Caring, Disciplined, Smart and Trustworthy.

In this spirit, starting next week, I'm going to be on a short term Leave of Absence from The Coca-Cola Company through March 31, 2015.

I have a passion project that I have an opportunity to pursue during that time.

It's not with another company or for-profit brand, it's truly something I believe in and a once-in-a-lifetime opportunity to work on something that I think can change the world.

In my absence, I have infinite confidence in our team and our plans.Sandy and I have asked Andy McMillin (Sparkling Brands), Ivan Pollard (IMC) and John Roddey (Capability/GMCL Integration) to report directly to Sandy during this timeframe, leading our team and ensuring everything remains focused and on-track.

I know it will.

Thank you for all that you will do in Q1, I know it will be great. Wendy