Truck Safety Record That Was Walmart's Pride Now Under Scrutiny

Walmart, which long has prided itself on the efficiency and safety of its massive trucking fleet, faces questions about both following a high-profile crash involving one its trucks that seriously injured comedian Tracy Morgan and killed another performer riding with him on the New Jersey Turnpike early Saturday.

The driver, Kevin Roper, 35, had been awake for more than 24 hours prior to the early-morning crash, according to a criminal complaint in which he was charged with vehicular homicide and assault. He was freed on $50,000 bond and set to appear in court Wednesday.

Walmart said in a statement that it believed its driver was in compliance with federal regulations requiring no more than 11 hours of driving during shifts no longer than 14 hours period, followed by 10 hours of rest.

Walmart U.S. CEO Bill Simon said in a statement that the company will take "full responsibility" if investigators find its truck caused the crash. "We can't change what happened but we will do what's right for the family of the victim and the survivors in the days and weeks ahead."

Walmart has made a point of focusing on its safety and trucking efficiency efforts in public relations efforts in recent years as the company expanded its logistical reach by picking up goods at suppliers' warehouses rather than having suppliers deliver to its distribution centers. 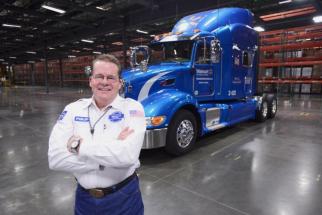 Walmart gave driver Philip Null a new tractor to use last year when he reached 3 million miles of safe driving.

Last year, Walmart awarded a driver who'd logged 3 million safe miles -- the 66th to reach that milestone -- with a new tractor to use for the balance of his career. Earlier this month, it showed off a new aerodynamic hybrid concept truck with a carbon-fiber body that's 4,000 pounds lighter than conventional trucks; cameras and video displays in place of side-view mirrors; and an ergonomic tractor complete with panoramic visibility plus a full-size sleeper, mini-refrigerator, microwave and flat-screen TV for drivers to use during breaks.

The truck involved in the crash, while less modern, had a system to warn the driver of stopped traffic ahead and automatically slow speed, Walmart said.

New Jersey State Police said Mr. Roper appeared to not see traffic slowing in front of him in time and swerved before hitting a Mercedes limo bus carrying Mr. Morgan, best known for his roles on NBC's "30 Rock" and "Saturday Night Live." The crash also killed comic James McNair and injured three other occupants of the bus.

Federal Motor Carrier Safety Administration data show Wal-Mart has more than 6,200 trucks and 7,200 drivers who logged more than 667 million miles last year. Walmart's drivers had 380 accidents over the past two years, nine of them fatal and 129 involving injuries, according to FMCSA. But the agency's data show Walmart to have had well below the industry average for percentage of inspections leading to trucks or drivers ordered out of service, and it ranks in the top 0.5% of U.S. carriers for compliance with hours-of-service rules for drivers.