How to Keep Customers? Blend Old Strategies With New Tactics

I met recently with the head of a large company's sales and service organization, and I could see the frustration on his face. His company has added new online capabilities, increased the smarts of its salespeople and revamped its call centers. It also analyzes more customer data than ever and is genuinely trying to improve the customer experience. "I get good reports from our sales and marketing teams," he said. "But I really thought our service-improvement efforts would do more to move the needle."

Why are companies like this one -- well intended and improvement-oriented -- falling short when it comes to creating relevant, engaging customer interactions that deliver results at scale? This is what the 2012 Accenture Global Consumer Pulse Research sought to find out.

We learned that customers are frustrated, sometimes in unlikely ways. Their expectations also vary from channel to channel, with companies' service improvements often going unnoticed. Customers are also more inclined than ever to switch providers. The problem affects most industries, but it's particularly acute in the wireless phone, internet and cable/satellite service sectors -- industries whose offerings are already rapidly commoditizing.

The Accenture research surveyed more than 12,000 people in 10 industries and 32 countries. Only about 25% of respondents from the above-mentioned sectors think their providers have sales and service programs that cater fully to their diverse preferences.

In addition, 47% are frustrated by companies that don't use information already submitted, to streamline their interaction or make relevant and customized offers. More than 65% of respondents said they've had to contact customer service multiple times for the same problem, deal with unfriendly agents and endure lengthy hold times. And 80% of this group say they might switch as a result. Customer switching actually has increased in all 10 of the industries we studied.

How can companies improve?

The study also identified underutilized tactics that can help your customers notice and value your efforts. Many are a matter of combining solid strategies (which many companies have implemented) with up-to-date tactics (which many companies haven't implemented). A good example is to start spending as much time on setting expectations (making promises) as you do on meeting your commitments (keeping promises). Sixty-three percent of survey respondents noted frustration when their buying or service experiences differed from what was promised upfront. 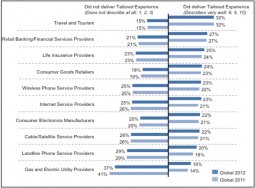 Survey respondents who agree/disagree that they're getting a tailored experience.

The more customers interact digitally, the more they want tailored interactions. That means different environments and standards for different customers -- not a monolithic one-size-fits-all experience. Wireless phone, internet and cable/satellite service companies have the advantage of knowing where their customers come from, but they don't always use these insights to tailor interactions. Which wireless provider did the customer switch from? What can you do to make each customer happy that the previous provider didn't do?

Companies could also do a better job of acknowledging small increases in individual customers' business. Those increases aren't small to the typical customer. Many crave recognition when they send more business your way. Do you notice when someone uses more data services every month or starts buying on-demand movies? Many customers don't think you do.

Next, treat customer data with more care. For example, 50% of survey respondents said it's extremely important for service reps to know a customer's history, so the person doesn't have to repeat himself. In short, customers expect you to do something with the data they give you -- things that make their interactions with you easier or more rewarding. People really do pay attention to what you remember and use.

Concentrating less on why customers leave and more on why customers stay is also important. A whopping 85% of survey respondents said the company could have done something to keep a switch from happening. What's more, 67% said they might not have left if the company had simply resolved a sticky issue during the first interaction. Fifty-four percent believe that being recognized and rewarded for their level of business could have prevented their leaving.

One more point. Buyers are getting choosier. Forty percent said their expectations are higher than a year ago. So, designing customer-responsive products, services and messages can be critical. But, if you plan to keep your most desirable customers, you may want to spend some additional time in new areas that just might move the needle.

ABOUT THE AUTHOR
Robert Wollan is global managing director of the Accenture Sales & Customer Services practice. He is co-author of "Selling Through Someone Else: How to Use Agile Sales Networks and Partners to Sell More," to be published in 2013. 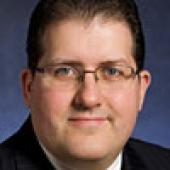 Robert Wollan
View all articles by this author