Movember, which is all about growing mustaches, not shaving them, has an official razor sponsor. Yep, you read that right. Find out why below, along with how Chili's is resurrecting an old Vine video for a Halloween promotion, even though Vine has been gone for two years. But first, there's a new ad ranking out, and the winner might surprise you.

Dawn for the win

Nike's Colin Kaepernick is the most talked-about ad of 2018 so far—but it trailed a Dawn ad on Ace Metrix's quarterly list of the most powerful ads. The spot by Publicis shows the dishwashing soap brand being used to clean ducks caught in an oil spill. Ace Metrix uses machine learning analysis to determine how viewers react emotionally to ads. The "powerful" score is based on reactions such as "bold" or "meaningful." Nike's spot, which is by Wieden & Kennedy, ranked No. 4, also trailing ads for Chik-Fil-A and Ford.

Here's the ultimate non-intuitive partnership: Schick's Hydro is now the official razor of the Movember Foundation, which encourages men to stop shaving and grow mustaches for charity. The idea is to inspire men to shave in October before they grow facial hair in November, which does kind of make sense, since you can't grow it if you've already got it. It's all part of a new "The Man I Am" campaign from MullenLowe, the new agency for the Edgewell Personal Care brand, which began in August with TV ads featuring a diverse range of men expressing their individuality by using Schick. The brand also is working with Cleveland Cavaliers star Kevin Love to make a "Locker Room Talk" webisode series about what healthy masculinity means.

The campaign joins a trend in men's grooming, particularly razors, to take emotional dives into the many dimensions of manhood. This started in 2016 with Unilever's Axe, but has extended in various forms this year to new advertising from Harry's, Unilever's Dollar Shave Club and Procter & Gamble Co.'s Gillette. All of which raises the question: Now that all men can be assured that nearly every men's grooming brand "gets" them in all their uniqueness, will ads go back to saying what the products do?

Oreo and Dunkin' joined forces this week, promoting each other with a back-and-forth on Twitter, in a pairing that makes a lot of sense. But Dunkin' and Dove? The beauty brand and the coffee and donuts chain hooked up on a joint promotion last week. The hook? It was meant to portray how hectic the mornings of women can be, hence the need for a quick brush with the instant hygiene afforded by Dove's dry shampoo, plus a strong cup of coffee. "Social media has exploded with women sharing how coffee and dry shampoo are their secrets to getting up, out and on with their day," Piyush Jain, VP of haircare for Dover-owner Unilever, said in a statement. The partnership includes a chance to win a year's supply of Dunkin' Coffee and a pop-up co-branded styling café that was open briefly Oct. 1. Women can still enter the sweepstakes using the hashtags #DoveXDunkin or #DxDSweepstakes on Twitter or Instagram of by visiting the DoveXDunkin.com website by Nov. 8.

Vine, Twitter's short-form video platform, has been dead for two years. That's not stopping Chili's from resurrecting a one-time viral Vine as part of a Halloween promotion. The dining chain will soon sell boxers and cardboard phones for $25 in hopes that people will recreate a 2015 Vine video that showed a man approaching a bathroom mirror in his underwear and randomly saying "Welcome to Chili's."

For some odd reason, the Vine, by Adam Perkins, drew millions of views and inspired parodies. "This Halloween, slip on your boxers and hold up that cardboard cell and get ready to welcome people to Chili's all night long!" Chili's said in a statement. With Vine gone, the chain is encouraging people to tweet photos to @chilis or tag the brand on Instagram.

Friendship Dairies is spoofing fashion ads with a new campaign featuring models in white t-shirts romping around in jeans bedazzled with fruit on the back pockets. The campaign isn't for denim, of course. It's for single-serve fruit on the bottom of cups of cottage cheese. "The campaign pokes fun at the outdated and ridiculous messages women often get from the fashion industry," Ray Langton, senior product manager at Friendship Dairies, said in a statement.

The industry could use a boost. U.S. cottage cheese consumption fell to 2.1 pounds per person in 2017, down from 2.6 pounds a decade earlier and as much as 4.6 pounds per person back in the late 1970s. The push includes online video, print, radio, email and in-store display and comes from Partners & Napier, which worked with director Sullivan Slentz of Optic Sky Productions.

What's in a name?

The company that made a name for itself by eschewing any names, is hosting its first New York pop-up shop later this month. Brandless' store, open from Oct. 24 through Nov. 4, will invite customers to learn, taste and try. Brandless, which was founded last year, hosted its first temporary store, called a Pop-up with Purpose, in Los Angeles earlier this year. 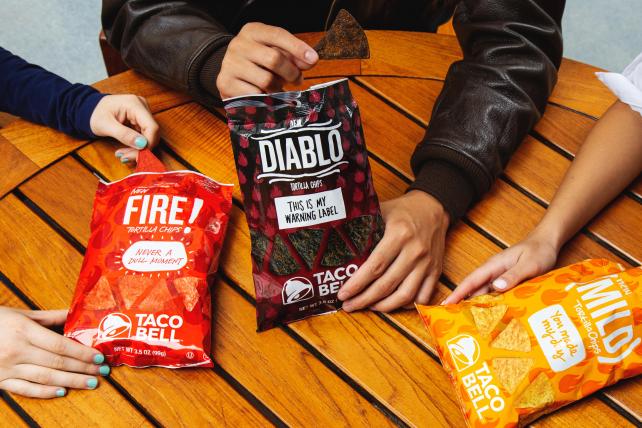 Taco Bell is investing more in its chip biz with Diablo tortilla chips. The spicy vegan, kosher, gluten-free chips get their dark coloring from vegetable juice.

$350 million: Sales on Amazon of school snacks for the first half of 2018, according to One Click Retail cited by foodnavigator-usa.com. That's up 40 percent from the same period last year.

Lisa Borders this week was named the first president and CEO of Time's Up, the 10-month-old women's rights organization. Borders, who is speaking at the Association of National Advertisers' annual Masters of Marketing conference later this month, was most recently president of the Women's National Basketball Association.