Denny's, the latest restaurant to announce a cage-free egg plan, took a humorous approach to its announcement as it realizes it is late to the game.

Lately, it seems like every week there's a restaurant chain or food maker announcing its commitment to cage-free eggs or making another food sourcing announcement.

Thursday is Denny's turn, as the diner chain said it would serve cage-free eggs in all U.S. restaurants by 2026. Denny's claimed to be the first family dining chain to signal such a shift, though its announcement still follows others in recent months from McDonald's and other companies. 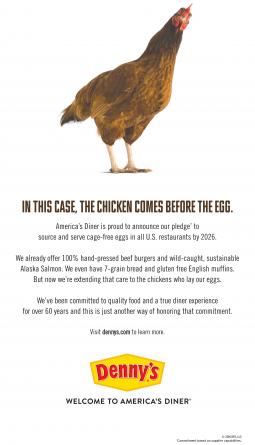 The announcement is featured in a full-page ad in USA Today and in a comical online video from Denny's advertising agency, Erwin Penland. The video features hens cackling with voice overs of their reactions to being out of cages. "We could fly," one says. "No we can't," another replies. And, yes, there's a chicken crossing the road joke.

The Humane Society of the United States, which has worked with companies including Denny's on cage-free policies, commended the move and said Denny's switch should get millions of laying hens out of cages annually. "We applaud the company for leading its sector on improving the treatment of egg-laying hens and urge its competitors to follow their lead," Josh Balk, senior food policy director at the Humane Society of the United States, said in a statement.

The move will take time for Denny's to implement. The chain serves more than 400 million eggs annually, while smaller egg sellers such as Taco Bell can set plans to switch more rapidly. Denny's is using its cage-free announcement as a way to highlight other items it serves, such as wild caught, sustainable Alaska salmon.

In other ingredient sourcing news, Papa John's said earlier this week it is the first national pizza chain to announce the removal of artificial flavors and synthetic colors from its foods, including all pizza ingredients, toppings, dessert items and sauces. Papa John's said in December that it plans to serve poultry raised without human and animal antibiotics and fed a 100% vegetarian diet, by this summer.