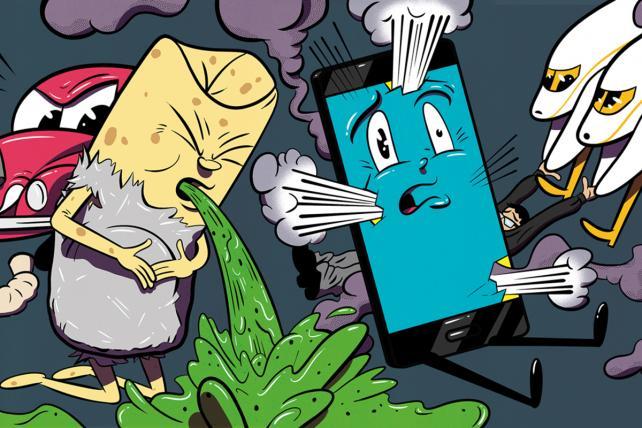 Brand disasters follow no script: Nose goo on pizza (Domino's); poison in a pill (Tylenol); an oil spill that kills 11 and wrecks the basin of an ocean (BP). They can pop out of nowhere and from anywhere, even, say, the mouth of a stalwart news-anchor star who lies about a battle he was never part of (we're looking at you, Brian Williams and NBC Universal). They can reflect something endemic to a corporate culture or an anomaly that nonetheless pulverizes all the good before it.

And in the end none of that stuff even matters once the debacle has landed. A mess is a mess that needs cleaning up—the job of the marketers and agencies and crisis management teams that will (hopefully) ensure that in the coming days or months or years no one will care about the nightmare that took place, and fewer still will remember it.

We profile four recent PR crises to take a look at their fails and the way they attacked them. Some, it seems, are doing better than others.

Samsung: Blowing Up the Bad Way

In less than a year, Samsung dealt with bad press on more separate fronts at one time than probably any marketer you can think of. And yet despite the onslaught of PR disasters—phones that caught fire, washing machines reported to injure their owners and entanglement in a scandal that toppled the president of South Korea—Samsung somehow managed to generate record-breaking profit and win back consumers.

The most notable fiasco followed the August 2016 debut of Samsung's much-anticipated Galaxy Note 7 smartphone, the battery of which had a tendency to catch on fire. By October, the Department of Transportation had banned the phone from commercial airplanes. After a recall, an internal investigation, a resumption of sales with a "safe" battery and the subsequent evacuation of a Southwest Airlines flight when a Note 7 started emitting smoke, Samsung gave up on the model. There were also lawsuits and memes—lots of memes.

A month later, another product line added fuel to the, uh, fire. In conjunction with the U.S. Consumer Product Safety Commission, Samsung recalled 34 models of its top-loading washing machines "due to risk of impact injuries" from excessive vibrations or lids coming loose. There were nine reports of wounded consumers, "including a broken jaw, injured shoulder, and other impact or fall-related injuries," the commission said.

As its products evoked Stephen King's 1986 movie "Maximum Overdrive," in which machines turn against humans, Samsung's de facto CEO, Lee Jae-yong, found himself in the middle of a far-reaching political scandal in South Korea. In late August he was convicted on charges of bribery and embezzlement and sentenced to five years in prison. 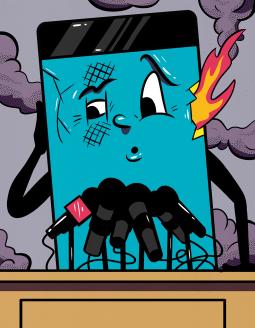 If the bizarre onslaught hurt the company's fortunes, however, it seems like it's going to pull through pretty well. Operating profit in the second quarter hit $12.7 billion, a new high for the company, and its mobile division fell but remained in the black. Earlier this year, Samsung also snagged three top honors at the Cannes Lions International Festival of Creativity for a Galaxy smartphone ad about an ostrich learning to fly by using VR.

Experts say Samsung was able to survive its crises by halting all marketing for a time, save for an apology ad, and being open with consumers, regulators and the media. Last November, it addressed the Note 7 debacle with a full-page mea culpa in publications like The Wall Street Journal, The New York Times and The Washington Post, which noted that "we are truly sorry."

During the Oscars telecast in February, Samsung ran several commercials that focused on its rigorous product testing. But it also began to pivot back to other messages: YouTube personality Casey Neistat appeared in another spot, representing and courting the sort of creative types who shoot and produce everything with their phones.

And Samsung significantly raised the ante when in March it introduced its Galaxy S8 phone, delivering a curved screen, better colors, facial recognition and a slew of other upgrades, and, this month, the the Galaxy Note 8, the successor to the explosion-prone version.
-- George Slefo

Free chips and guacamole. Buy one burrito, get one free. Online games. New ads. None of it could save Chipotle after food-safety woes. Now the "Food With Integrity" chain is pinning its hopes on a new hero: queso.

"You shouldn't underestimate how much potential it has," Chief Marketing and Development Officer Mark Crumpacker told Chipotle investors in July, ahead of the fast-food chain's national queso debut.

It's been about two years since E.coli-induced restaurant closures, norovirus and salmonella outbreaks first put Chipotle in the spotlight, and it has yet to find firm footing. Early apologies to the public fell flat. Its stock price plunged. And a mix of fixes, including the implementation of new cooking procedures and staffing protocols, led by James Marsden, the newly hired executive director of food safety (think: more hand washing and staying home when sick), didn't help its bottom line.

Last year was bleak: comparable sales plunged 20.4%, transactions declined 14.4%, and total revenue fell 13.3%. And Chipotle had other issues to contend with, including Crumpacker's arrest on cocaine charges, an activist investor buying shares, shuttering its small ShopHouse Asian chain and board shakeups including the departure of the co-CEO, Monty Moran.

And just as news was improving—Chipotle's same-store sales rose in the first two quarters of 2017—bad news reared its head. A malware attack hit card transactions in March and April. A fresh norovirus outbreak at a Virginia location in July was believed to stem from someone working while sick, proving that issuing protocols doesn't mean everyone follows them. And, oh yeah, rodents fell from the ceiling of a Texas location, an incident captured on video. Though it may have had more to do with a structural issue in the building than store cleanliness, the video went viral and viewers were plainly disturbed.

Chipotle is forging ahead, hoping some of its latest efforts will kick-start a rebound: playing up its clean-label ingredient lineup in new ads, app updates, service tweaks. It's also continuing to open hundreds of locations each year, with plans for its first drive-through. After all, some patrons need more than queso to convince them to give Chipotle another shot. -- Jessica Wohl

Volkswagen went from Fahrvergnügen to Farfrumlegal in the wake of its 2015 emissions scandal. And once-proud owners who drove diesel VW vehicles for their environmental appeal were not shy about expressing their outrage that the company had cheated on emissions tests. One ad agency even sold magnets at VWsham.com meant to be displayed on VWs with slogans such as "Future former VW owner," "VW. German for FU," and, yes, "Farfrumlegal."

"We had a surge of interest," says Nat Gutwirth, a partner at Philadelphia-based agency Left Hand Creative, which created the magnets in partnership with Jonathan Perloe, a communication strategist. "People who were driving these cars were embarrassed for having been bamboozled, so we wanted to give them an emblem of their outrage to share their discontent. We're still getting orders here and there."

But two years later, VW appears to have put the worst of the scandal in the rearview mirror, based on its sales and profits, even as it shells out billions of dollars to settle legal claims. Globally, the Volkswagen Group reported second-quarter operating profit that more than doubled. In the U.S., unit sales of VW branded vehicles jumped 5.9% in the first seven months of 2017, according to data compiled by Automotive News. Sales at VW Group of America, which includes Audi, were up 5.7%. Volkswagen Group's stock has not fully recovered, however. Preferred shares on the Frankfurt stock exchange traded for 127.15 euros on Aug. 10, compared with 190.85 euros on the same date in 2015 before the scandal broke.

In the midst of the scandal, VW resisted the temptation to run a big-budget apology campaign that might have only brought more attention to the issue. Efforts have been more tactical, like running newspaper ads in late 2015 that declared "we're working to make things right," while plugging a customer goodwill program.

In the U.S., the comeback strategy involves selling more family-friendly SUVs and electric vehicles, while plugging high-tech features such as driver-assistance systems. VW this year even turned to a grandma for help, putting a 78-year-old Irish immigrant in a series of emotional ads for the new Atlas SUV in a campaign by Deutsch L.A. that broke in May. -- E.J. Schultz

The scene was a shocker: David Dao, a doctor who refused to give up his paid-for seat to a United Airlines employee in April, was forcibly pulled out of it, screaming, and then dragged down the aisle by aviation security officers. Upset passengers, some up in arms, shot the scene on phones, and videos—one of which shows the doctor's subsequent bloody face and pleas "to go home"—quickly went viral.

Talk about a PR blunder. Hard to imagine things could get worse. But later that month, a giant show rabbit died during a United flight and then was cremated by the airline before cause of death was determined, leading its owners to claim a cover-up had occurred.

The airline, of course, is trying to get back into consumers' good graces. It has made a number of changes since April, such as adding new flight routes, eliminating the red tape on permanently lost bags by adopting a "no questions asked" policy on lost luggage, and increasing customer compensation incentives—up to $10,000—for voluntary rebooking. It also created the new role of senior VP-customer solutions and recovery, tasked to step in when a customer's trip goes off course.

"We recognize that we're on a journey to earn back customer trust," Maggie Schmerin, director of brand PR for United Airlines, wrote in an email. "And we'll continue to work harder than ever to put our customers at the center of all we do."

The airline's united front would be more effective if mishaps were avoided. But April was followed by turbulence in July when United gave a toddler's paid-for seat to a standby customer, forcing the mother to hold the baby the entire flight. At month's end, Comic-Con passengers were banned from packing comics in their checked luggage in what was likely a misinterpretation of an old TSA blog post.

The brand is trying "to paint a rosy picture while it continues tripping over itself in customer relations," says Hennes Communications VP Howard Fencl. "To repair its reputation, United needs to upend its corporate culture and back up its promises with concrete action."
-- Lindsay Stein