Dixie Asks People to Turn Off Their Phones for Dinner 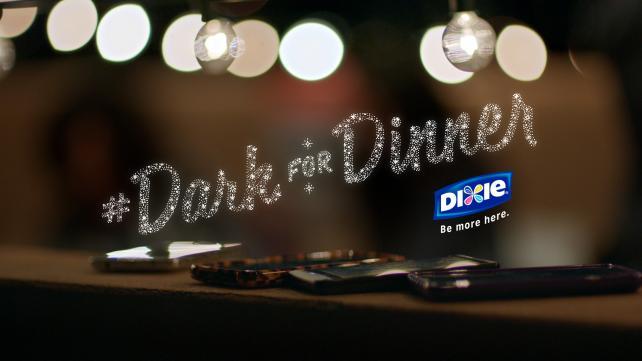 Last Thursday, Andrew Noble , the brand director for paper plate brand Dixie, asked a New York restaurant filled with reporters, agency execs and PR folks to join him in turning off their phones during dinner. One by one we dropped our smartphones in a black cardboard box and picked up conversation starter cards with questions like "would you rather fight one man-sized baby or eight baby-sized men?" and "what is your hidden talent?" As the night progressed and the wine flowed, the questions got weirder -- would you rather sweat orange juice or milk? -- and the answers got more disturbing: "Milk, so I can make my own mozzarella."

The evening kicked off "Dark for Dinner," an effort from Georgia-Pacific's Dixie brand that encourages people to give up their phones, tablets and TVs for one dinner a week. Dixie is asking consumers to let the virtual world know they're disconnecting, put their devices away and then share their experiences after the meal with the hashtag #DarkforDinner. The campaign begins on June 14 and will run for the following six Sundays with a new theme each week. Themes include, broadly, getting to know your dad for Father's Day and playing Would You Rather.

The concept -- part of a broader effort called "Be More Here" -- was born out of research commissioned by Dixie that showed the top distractions among families during dinner are phone calls, emails, texts and TV, and that adults are the worst offenders when it comes to being distracted from a meal.

The brand, which has always positioned itself as part of the family table, is tapping into that insight to show families that Dixie gives them more time together. With paper plates and cups, you can skip the dishes and linger longer.

"We want to encourage consumers to be more present in the moments that matter with the people that matter," said Mr. Noble, senior brand director for Dixie Consumer Products at Georgia-Pacific. "And clearly, in our product lines, we play a role around that at dinner time."

The push from Droga5 includes a 30-second TV spot that will begin airing on June 10. It goes beyond the typical two-parent nuclear household and features four real families and friends going "Dark for Dinner." Highlights include a college girl who says she finds her friend's dad attractive and a shocked mom hearing about her son's almost-arrest.

"We don't want to be in the traditional-family world all the time," said Mr. Noble. "We do have some families that have two parents, the sort of nuclear household, but we also have multi-generational families that live in the same house and even groups of friends that consider themselves family. That resonates across everyone."

Additional videos will roll out on the "Dark for Dinner" microsite, including a 60-second version of the TV spot and others that center on weekly themes. The second wave of the campaign, slated to break later this summer, will include a stronger call to action to turn the effort into a cultural trend, Mr. Noble said.

With the campaign, the century-old paper plate brand is shifting away from product-oriented ads towards emotional brand messaging.

"Dixie brand consumers know the benefits of the brand. They know our name. They know the quality of the products that we make," said Mr. Noble, who started his career at the company in accounting 18 years ago and became the marketing lead on the Dixie brand last year. "This campaign will help remind them of their emotional connection" with the brand.

The approach could ripple out through Georgia-Pacific's portfolio of brands following an agency reshuffle that took place last summer. The CPG group added four creative shops to its agency roster: Droga5, Deutsch LA, The Martin Agency, and Cutwater.

Dixie tapped Droga5, as did Quilted Northern, which unveiled a campaign from the agency last month. With Dixie, the agency want to keep the brand at the family table, but shake up the category.

"Dixie made it clear that they stood for presence at meal time," said Spencer Hansen, art director at Droga5. "We captured things that actually happen at dinner; people saying awkward and embarrassing things, real laughter, yelling, talking over each other. The kind of stuff that contrasts the happy, shiny, perfect people you usually see in TV spots."

Dixie is also working with parenting and family expert Dr. Michele Borba on the push, in addition to tapping celebrities to participate in "Dark for Dinner." IMG's Catalyst handled PR for the push.

Georgia-Pacific spent $78 million on U.S. measured-media across its brands last year, according to Kantar Media.