Credit: The Woman in the Room

The Woman in the Room is back and she wants her money.

The advocacy project, started last fall by a group of women in tech and advertising in response to workplace bias, has a new initiative for Equal Pay Day, which this year falls on April 10. The Woman in the Room group is inviting workers to send anonymous emails from the Woman in the Room address to their bosses, demanding action on equal pay.

"We're asking for raises or equity, or spot bonuses until they can get their sh*t together and pay women equally," reads an email the group sent to members of the press on Monday.

Since the Woman in the Room's poster project in October, in which supporters could download and print empowering posters with missives such as "Don't Re-state My Idea As Your Own" and "I Don't Need It Man-splained," calls for equality have only intensified. Celebrities such as Uma Thurman and Angelina Jolie have told their stories and voiced their support of the #MeToo and #TimesUp movements.

Many took to social media on Tuesday as well to voice their support of pay parity.

It's equal pay day. We have work to do. pic.twitter.com/rQ1aO9Gvgu 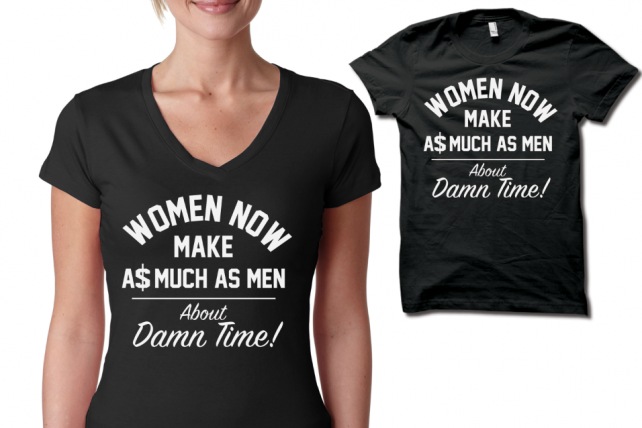 In addition, ad agency 22squared collaborated with the National Organization for Women on their own equal pay program with T-shirts stating, "Women Now Make As Much As Men. About Damn Time." Yet there's a twist. When consumers try to purchase the shirts from the four online sellers supporting the project, they're informed at checkout that the items are on backorder until 2119, the predicted year for pay parity, according to a press release. Another missive encourages consumers to donate to NOW. The false sale is similar to another recent campaign, this one for gun control; shoppers who tried to buy bulletproof vests for children were told that kids don't need such products but that laws need to change.

At least one survey shows that there's still plenty of work to do for equal wages. Just 40 percent of women have received raises of 5 percent or less since 2013, which falls below the cost-of-living increase over the same five-year timeframe, according to SheKnows Media, which surveyed nearly 1,500 working women in the U.S.

The report also found that 55 percent of women work at companies with female executives that number less than 10 percent, and 60 percent of women believe becoming a parent could affect their opportunity for promotion in a negative way. Roughly a third of women who responded to the emailed survey said they would not be as motivated to work toward advancement if they found that a male colleague was paid more for the same job, SheKnows said.

"Women remain underrepresented at executive leadership levels at organizations of all sizes and across all industries—even, ironically, in the women's media space," said Samantha Skey, president at SheKnows, which was recently acquired by Penske Media, in a statement.

Yet some are speaking up. Earlier this year, Elizabeth Rose, a former channel manager and project manager at Vice Media, filed a class-action lawsuit against her former employer, alleging she was not paid as much as her male colleagues.