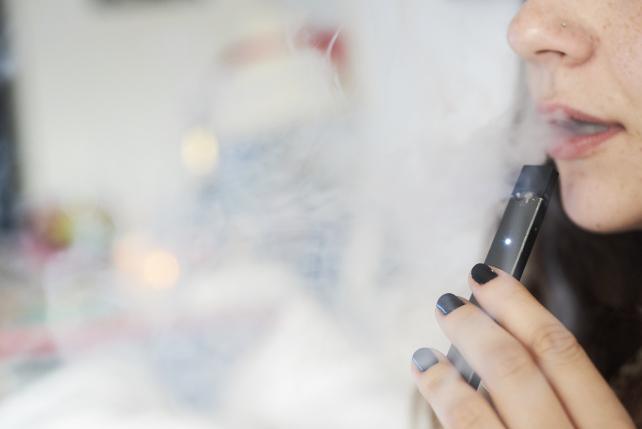 The Food and Drug Administration is threatening to pull flavored electronic cigarettes like Juul off the market if the tobacco industry doesn't do more to combat growing use of the products by children and teens.

FDA Commissioner Scott Gottlieb says the agency will soon release data that show a "substantial increase" in youth vaping this year compared with 2017. He says the problem had reached "epidemic proportion."

"I have grown increasingly concerned around what we see as rising youth use in these products, and I'm disappointed in the actions the companies have taken to try to address this," Gottlieb says in an interview.

The FDA told five major e-cigarette manufacturers Wednesday to come up with ways to address youth use in 60 days or the agency could require them to stop selling flavored products that appeal to children. The products being targeted are: Juul, Altria Group's MarkTen, Fontem Ventures' Blu, British American Tobacco's Vuse and Logic.

"This could result in a bullet through the head of Juul, the driver of youth initiation," says Nico von Stackelberg, an analyst with Liberum in London.

To gain clearance to return to the market, the companies would have to prove that the benefits to adults who use e-cigarettes to stop smoking outweigh the risks associated with youth vaping.

"I certainly am in possession of evidence that warrants that," Gottlieb says. He declined to disclose the evidence.

Of the 3.6 million middle- and high-school students who says in 2017 they are current tobacco-product users, 2.1 million used e-cigarettes, according to the Centers for Disease Control and Prevention.

"There is no question that a lot of the youth use is being driven by Juul," Gottlieb says.

Produced by San Francisco-based Juul Labs, Juul devices resemble a USB thumb drive and have become popular among students. The company has more than two-thirds of the U.S. e-cigarette market, according to Nielsen data. The FDA is currently developing a survey to determine what percentage of youth vapers are using Juul products, Gottlieb says.

"Our mission is to improve the lives of adult smokers by providing them with a true alternative to combustible cigarettes," Juul said in a statement. "Appropriate flavors play an important role in helping adult smokers switch. By working together, we believe we can help adult smokers while preventing access to minors, and we will continue to engage with the FDA to fulfill our mission."

A nationwide sting operation from June through August resulted in more than 1,300 warning letters and fines to retailers who sold Juul products and other e-cigarettes to kids. It was "the largest coordinated enforcement effort in the FDA's history," according to the agency.

Gottlieb recently began to ask whether the use of Juul and other similar products by kids is overshadowing any benefit to adult smokers using the devices to help them quit cigarettes. He said in June tobacco companies "better step up and step up soon" but he didn't divulge what consequences the industry could face—until now.

In July 2017, the FDA said it was considering lowering nicotine levels in traditional cigarettes. In addition, the agency pushed back until 2022 a deadline for electronic-cigarette companies to submit applications to the FDA. Gottlieb said at the time he was trying to ease the regulatory pathway for products that are potentially less harmful sources of nicotine than smoking. Critics of pushing back the deadline raised concern that more kids would take up vaping.

Congress gave the FDA the authority to regulate tobacco products in 2009. The agency extended that reach to other tobacco products, including e-cigarettes, in August 2016 and allowed those products that were already on the market to continue sales while preparing an application for FDA clearance. The FDA is investigating whether some products on the market were introduced after the 2016 date and may need to halt sales, though didn't name which ones may be violating the law.