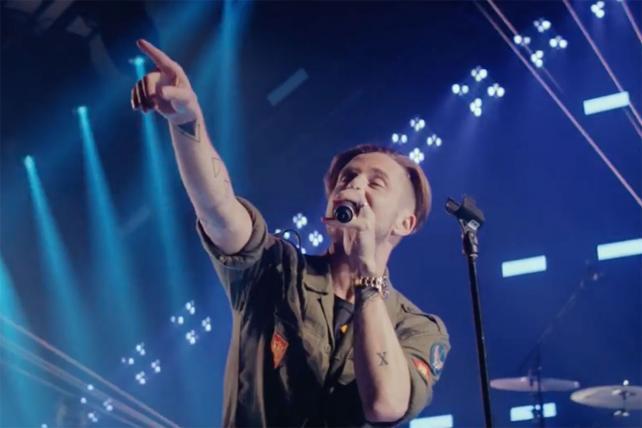 Fiat Chrysler Automobiles, known for frequently making music the centerpiece of its ads, is cranking up the volume even louder this summer.

The automaker collaborated with 10 music artists—including OneRepublic and Alice Cooper—and multiple record labels for a slew of ads that plug FCA's new deal with Apple Music. Spots give as much attention to Apple's in-dash iPhone digital display, known as CarPlay, as they do to FCA's vehicles. FCA's Apple Music promotion, which kicked off last month, allows buyers of Jeep, Chrysler, Dodge, Ram and Fiat vehicles to get up to six months free of the music streaming service.

As it has done in the past, FCA blurs the line between music videos and TV commercials; new Jeep ads is used to help debut OneRepublic's new song, "Connection." FCA Chief Marketing Officer Olivier Francois, who has a penchant for striking big Hollywood marketing deals, unveiled the campaign Wednesday at a press event at a Warner Music Group studio in West Hollywood.

"Music has the best ROI on Planet Marketing," Francois said, "especially if you tap into new songs of emerging artists, it's cheaper and it stands out." FCA typically takes siloed creative approaches with its vehicle brands, but the summer campaign stands out for unifying its five major nameplates with the single Apple plug. Jeep, FCA's sales workhorse of late, gets a starring role with five ads.

The song's release is timed with the new ad, which begins airing on TV on July 2. The spot, called "Sold Out," depicts a group of fans who can't get into the concert. They improvise by playing "Connection" in their Jeep on Apple CarPlay, and then catch of view of the show from high in the hills.

Two other OneRepublic spots show fans using CarPlay features to navigate to the concert. OneRepublic frontman Ryan Tedder spoke at Wednesday's event. He said he was first approached by Jeep late last year. But while a lot of brands would prescribe specific lyrics for a song destined for an ad, "I got the opposite of that from Jeep," he said. It was open ended, with the brand confident that the band would put something out it liked.

The agency behind the Jeeps ads is Highdive. The tiny Chicago agency made its way onto FCA's roster earlier this year for a Super Bowl ad for Ram that drew criticism for its use of a Martin Luther King Jr. speech to sell trucks. In an interview Francois said DDB remains Jeep's lead agency. But the Apple ads are "a one of a kind project" and FCA liked Higdive's pitch, he said. So "we wanted to give them a chance," adding "they have done good work."

A couple of Dodge ads by GSD&M star hard rocker Cooper, featuring his song "Under My Wheels." The ad pokes fun at the often ridiculous demands performers make in their so-called riders, the list of items they want backstage. In one of the ads, Cooper's requests to a Dodge-driving assistant include a black goat and black roses.

For Fiat, the automaker features a new track by DeJ Loaf & Leon Bridges called "Liberated." One ad by DDB Chicago, which will air on digital channels, shows a woman taking her frustrations out on her man's drum set after he texts her that he is staying out with the guys for the night.

For Ram, FCA turned to country music duo Brothers Osborne with an ad that features their new track "While You Still Can." It portrays the duo aiding theater repair efforts in Florida's Port Saint Joe, the community that inspired the album. The agency is Nashville-based G7 Entertainment Marketing.

FCA includes its Chrysler Pacifica family van in the campaign with an ad starring Kathryn Hahn, who has been appearing in mom-friendly ads for the brand since earlier this year. One the the new ads, called "Girls Night Out" by Doner, features the track "Good Time" by Nicky Blitz. In the spot, Hahn packs the van with friends as they head to a concert, but she just can't seem to get away from the kids.