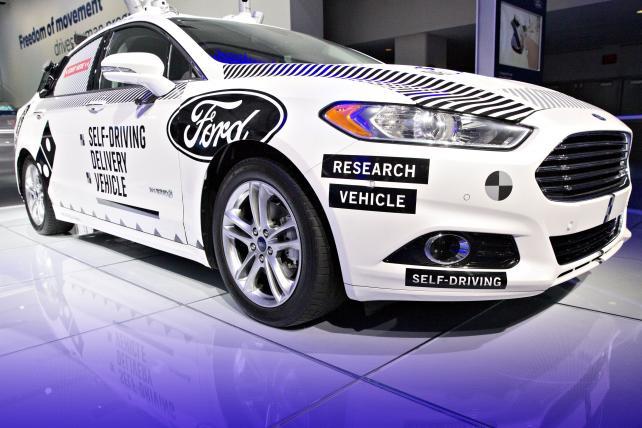 Ford Motor Co. on Tuesday said its investments in autonomous-vehicle development are expected to total $4 billion through 2023 and that it has formed a subsidiary devoted to those efforts called Ford Autonomous Vehicles LLC.

The subsidiary will be be based primarily at the campus Ford is creating in Detroit's Corktown neighborhood and led by Sherif Marakby, a Ford vice president who spent a year heading Uber's autonomous-vehicle program before rejoining Ford in 2017. It will have its own board of directors chaired by Marcy Klevorn, Ford's president of mobility.

"Ford has made tremendous progress across the self driving value chain — from technology development to business model innovation to user experience," Ford CEO Jim Hackett said in a statement. "Now is the right time to consolidate our autonomous driving platform into one team to best position the business for the opportunities ahead."

Ford shares rose after the announcement, gaining 2.2 percent to $10.70 in midday trading.

The $4 billion in AV spending includes $1 billion that Ford has committed to investing in Argo AI, a Pittsburgh startup that has become its partner in self-driving system development.

The subsidiary is set up to take on other third-party investment and will be separate from Ford's Smart Mobility LLC, which handles new business opportunities such as its Chariot shuttles.

Marakby, currently Ford's vice president for autonomous vehicles and electrification, has been given the title of CEO for the autonomous-vehicle unit.

The automaker made several other organizational changes effective Aug. 1 as a result. Ted Cannis, Ford's global director for electrification, will lead Ford's electric-vehicle arm, known as Team Edison. Additionally, Ford said it is reorganizing its global operations division, headed by Joe Hinrichs, to include information technology as well as the company's global order-to-delivery system.

Ford's chief information officer, Jeff Lemmer, will report to Hinrichs. And Hau Thai-Tang, Ford's executive vice president for product development and purchasing, will report directly to Hackett instead of Hinrichs.

"The evolution of computing power and IT have helped bring great products to customers — from cars to tablets," Hackett said. "We can now harness this technology to unlock a new world of vehicle personalization, supply chain choreography and inventory leanness that rivals any industrial model in the world — and Joe's challenge is to help us redesign this system to do just that — while better serving customers and dealers and improving our overall fitness."

The announcement follows Ford's recent purchase of Detroit's vacant Michigan Central Station, a century-old office tower it plans to convert into the hub of an urban campus dedicated to work on autonomous and electric vehicles. Ford opened an office near the depot earlier this year for about 200 employees that are part of Team Edison.