Happy list season, that time of year everyone (including Ad Age) ranks everything about the year that was, or the year that is to come. Below, find out what Ace Metrix deemed "the most unusual ad of 2018." We also have the latest on a social media gaffe by the UPS Store. But first, some news that will be pleasing to your pooch's ears.

When is the last time your pet had a peaceful rest on the Fourth of July? Probably never. Well, Ford has come up with a solution. The automaker has developed a "noise-cancelling dog kennel" that promises to shelter pets from the terrifying sound of fireworks. The automaker and one of its agencies, WPP's GTB, built a prototype that includes microphones that can detect the sound of fireworks. Then, an audio system emits frequencies that cancels out the noise. 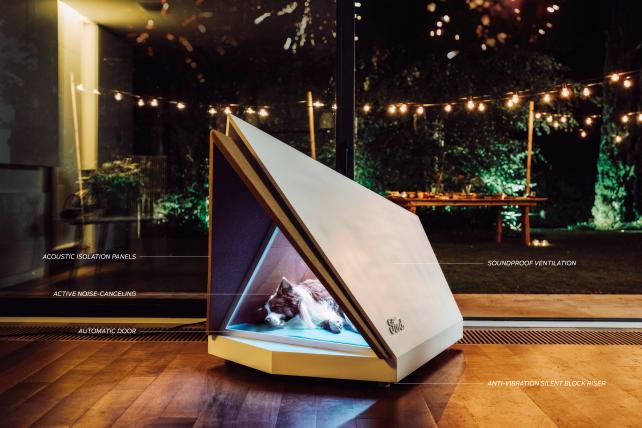 What does this have to do with car marketing? Ford says the project is inspired by the noise-cancelling technology in its Edge SUV. While it's only a prototype for now, Ford says it is the first in a series of initiatives, called "interventions," that apply "automotive know-how to help solve everyday problems."

"Ford packs their vehicles full of amazing technology to make driving and life inside the car better. The problem with communicating these features however is that their impact is usually invisible. The Interventions content series is a light-hearted way to visually represent Ford's innovative technology and perspective to progress", says GTB Chief Creative Officer Julian Watt.

The investment is paying off, at least in terms of PR value. Numerous publications have picked up on it, giving Ford plenty of positive press.

UPS found itself in hot water this week when a tweet about shredding letters to the North Pole went viral, and led to social media outrage. According to PR Week, the delivery company deleted its original tweet, and a subsequent attempt to fix it. Staci Reidinger, PR and social media manager, told PR Week that the company has tried to be "whimsical" on Twitter but also wants to make its business opportunities clear. She added that UPS will not be tweeting any more on the topic. A UPS spokesman did not reply to a request for comment on the Santa-gate saga.

'We are not trying to ruin Christmas': UPS Store deletes tweets offering to shred children's letters to Santa https://t.co/jw8zNAb2DZ

Ace Metrix, which measures viewer reactions to ads, has crowned this seemingly low-budget spot from Comcast Xfinity as "the most unusual ad of 2018."

We're not exactly sure what the brand is selling by swapping out the faces of the family, including the dog, but it scored high on Ace Metrix's "Left Field" measurement, which ranks ads that appear "outside the realm of possibility." Is that a good thing? Who knows, but it found its way to the top of this list. So there's that.

Other winners include Huggies for "most heartfelt ad," while Farmers took the crown for funniest ad. See both below.

You can show armpit hair on the subway

In our eternal quest to educate marketers about subway advertising etiquette, we share the news that you can show women's armpit hair and other body hair in ads. Billie, the direct-to-consumer women's razor brand, has taken over Williamsburg's Bedford Station with an out-of-home campaign flagrantly showing unshaven armpits and other safe-for-work lady parts. This comes after the MTA recently turned thumbs down on Tushy bidet advertising showing folks on the toilet. Billie's subway ads extend an effort that started earlier this year with a viral video campaign, now with 22 million views, acknowledging body hair exists. Strangely enough, Billie points out that women's shaving ads traditionally show women shaving already shaven legs. We at Marketer's Brief have been told discreetly that those beefy guys in male shaving ads are also shaving pre-shaven faces.

Consumers think less of a brand if its website is not updated, according to a new survey from Blue Fountain Media, a digital marketing agency. With nearly 40 percent of consumers concerned about their online privacy, many, or 39 percent, said they would think twice about using a brand if that brand's site was not "fresh, user-friendly, and current." Sounds like a happy holiday of business opportunities for digital agencies.

P&G leads conspiracy to do good

Attention do-gooders: Procter & Gamble Co. Chief Brand Officer Marc Pritchard is leading an effort to create a coalition of Brands for Good. Several companies interested in the #BrandsforGood Coalition met earlier this month at a Sustainable Brands Corporate Member meeting in New York to discuss sustainable solutions and getting consumers to see themselves as part of the solution through their purchases and behavior. Among the more than 50 companies attending the SB meeting and a subsequent CMO Summit were AT&T, Timberland, DuPont, Ford Motor Co., Heineken USA, HP, Kohler, Johnson & Johnson, Unilever's Seventh Generation, Nestle Waters and Keurig Dr. Pepper.

Plenty of brands spend big bucks for naming rights for college bowl games. Chipotle Mexican Grill is taking a different approach with its Chipotle Free Delivery Bowl. Through Jan. 7, it is offering free delivery on orders of $10 or more. "Given the iconic nature of Chipotle's Burrito Bowl, many consumers have pointed out that we should sponsor a bowl game," CMO Chris Brandt said in a statement, adding "rather than spending millions on a traditional game sponsorship, we decided to give that money back to our fans in the form of free delivery." The gimmick is a way for Chipotle to drive more delivery sales. Chipotle will also have a float in the Rose Parade for the first time, made using some of the ingredients it uses. For example, about 200 pounds of chili flakes will be used to cover a red tractor. The band Portugal. The Man. will perform and some of the chain's suppliers will ride on the float.

Jack in the Box hungers for a new home

Jack in the Box Inc. is exploring a range of alternatives, including a possible sale of the company. The San Diego-based burger chain said it has had talks with potential buyers. The potential sale comes two months after franchisees asked for new leadership and after Jack in the Box sold the Qdoba chain to Apollo in March. If nothing pans out, it plans to have a new capital structure in place in the coming months.

Feed these to your kids (then watch them climb the walls).

Live shot of drivers waiting to take the car elevator down to the new @elonmusk tunnels. pic.twitter.com/4HcJJQI0c7

iHeartMedia has tapped Eric Hadley for the newly created role of senior VP of marketing, reporting to CMO Gayle Troberman. Hadley was most recently CMO for a location marketing platform called GroundTruth.