The fight to make people notice advertising has gotten so difficult that it might not even be worth trying.

That's the conceit behind Fruit of the Loom's latest campaign, specifically designed to fly so under the radar that maybe no one at all notices it—even if it would be worth their while.

The effort promotes the brand's Everlight collection, lines of men's and women's underwear so light that the brand claims people won't notice they're wearing them. "We leaned into that," says K.T. Thayer, creative director at Crispin Porter & Bogusky, which created the campaign. "You probably think, 'Oh I'll definitely notice my underwear.' But then you'd also think you'd notice a poster you walk by every day that's four feet tall and three feet wide and tells you how to get almost two thousand dollars."

Yes, Fruit of the Loom left thousands of dollars in cash lying around and hardly anyone noticed. There's also a car out there that's still up for grabs (and a bunch of underwear).

A few weeks ago, a team from CP&B and production company Grandesign descended on the Lower East Side in Manhattan, looking very much like a typical street crew. In the relative calm of a weekend morning, they set up posters and props, along with hidden cameras to catch the action.

In several locations, they hid stashes containing Everlight underwear and $1,851. (Fruit of the Loom was founded in 1851.) One such stach was blocked by a poster with a QR code leading to instructions, another by a poster directing passersby to punch through it to retrieve money. Another was behind a small red door. One location was marked only by a tiny tube man, of the sort popular at disreputable car dealerships, clutching directions. Despite the constant admonitions of New York City's mass transit systems to "See Something, Say Something," only six people noticed that anything was out of place.

"One of the first experiments we did, it took the guy two hours to actually follow through and punch a hole in a poster and get the money," says Josh Shelton, associate creative director at CP&B. "He read the copy, he knew the money was there, he took pictures, he was on the phone, he left, he came back. He was afraid of doing public damage."

The creative team fell back on common ad tropes when coming up with each gimmick. In addition to the QR code and posters, there's a bus shelter ad for a realtor named "Eva Lighte" and print ads that need to be folded like a "Mad" magazine illustration to reveal a hidden website that details all of the other prizes still available. (Spoiler: the site is www.fruit.com/noticed. But www.everlightunderwearfromfruitoftheloomissolightyouwontnoticeit.com also works.) 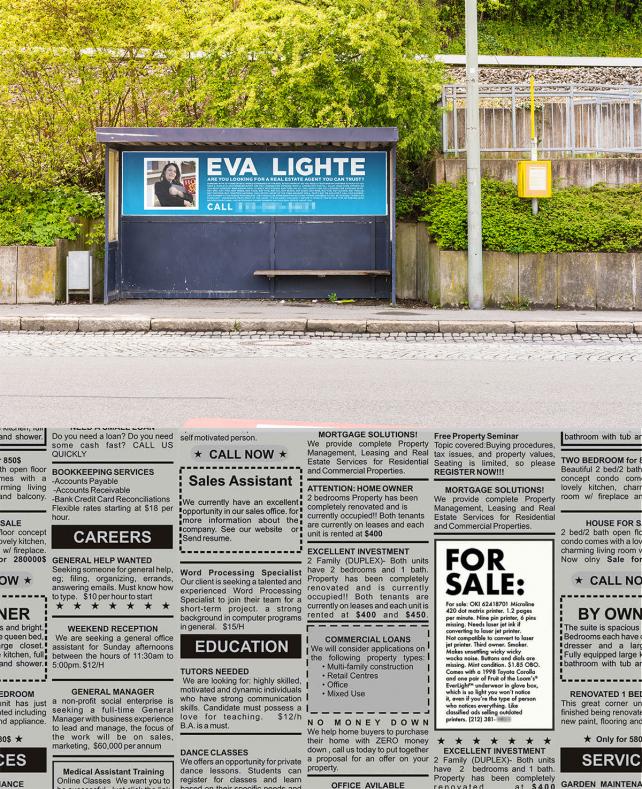 The car comes with the purchase of an old printer (for $1.85 OBO, of course), available to anyone who scours the right classified ad. "It's technically not a prize," Thayer says. "We are selling a dot matrix printer that comes with a 1998 Corolla that also comes with a pair of underwear in the glove compartment."

The other ads feature thematic items. "There are lensless bifocals, a subsonic alarm clock, an invisible 12-month calendar," Shelton says. "Things that only someone who's really good at noticing would appreciate."

CP&B created 11 ads altogether, some of which have already been solved and redeemed. Aside from actually heading to the Lower East Side, sharp-eyed viewers might spot an allusion to the campaign on social media or in a small ad on mobile.

There's also a more traditional ad campaign running. The TV spot for the men's line was released in March, and the spot for the women's line is due in late July or August. It's part of a long partnership between Fruit of the Loom and CP&B, which began working together in 2012.

"This campaign is a social experiment," Shelton says. There are more ads out there, and we're curious to see what happens."