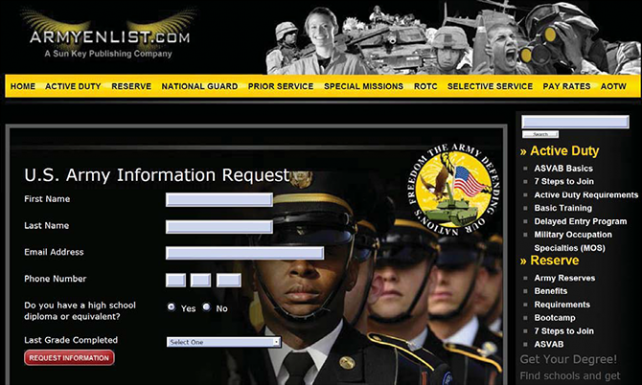 The Federal Trade Commission has shut down a scheme in which operators of fake military recruitment websites tricked people into sharing information that was then sold as marketing leads to post-secondary schools.

The fake sites used domain names such as army.com and navyenlist.com. The operators of the sites included Alabama-based companies Sunkey Publishing, Inc., and Fanmail.com, LLC. As part of the scheme, people who entered information on the sites got follow-up calls from telemarketers posing as military members, "giving consumers the false impression that the U.S. military actually endorsed those schools," according to the FTC.

The perpetrators earned from $15 to $40 per lead, according to the FTC. They lured people to the sites using search ads that included the phrases ""The Army Wants You! " and "Coast Guard Wants You!," according to the FTC's complaint, which notes the impostor sites had been in operation since at least 2010.

As part of a settlement, the defendants relinquished the domain names and were ordered to notify the recipients of the leads not to use them. Penalties of $11.1 million against Sunkey and $1 million against Fanmail were suspended for an inability to pay, according to the FTC.

"Those who are considering a military career deserve to have confidence that the recruitment site is legitimate and their personal information will not be misused," FTC Chairman Joe Simons stated. "The FTC will take action against any party in the lead generation ecosystem—from sellers to purchasers—that fails to comply with the law."