The push is part of Gap Factory's plan to distinguish itself from the broader Gap brand, an initiative that began earlier this year. The outlet chain carries an exclusive line of value-positioned styles only available at Factory. And while it draws on the power of the Gap name, Factory largely operates as its own brand.

For the holidays, Gap Factory wanted to emphasize fun and fashion, so it turned to Mr. Lachapelle, who known for highly-creative and often provocative work. The photographer brought his expertise in shooting iconic portraits to the campaign, which has a party-driven theme.

"It's very Gap, but it's brighter than anything we've ever executed," said Amondo Redmond, director of brand strategy and content at Gap Factory. "I think people will be surprised to see how David was willing to use his eye and use it within Gap Factory and create something really beautiful."

Supermodels Chanel Iman, Chrissy Teigen and Noah Mills star in the campaign, alongside New York Giants wide receiver Victor Cruz – some of the biggest talent Gap Factory has ever worked with.

The holiday campaign, which includes print, outdoor and social media, launches in stores and in national publications, like People magazine, at the end of the month. Gap Factory is also looking to earned media from TV appearances, retail and blogger partners to expand the campaign.

Gap Factory says the budget for the push is significantly more than for previous campaigns, but declined to disclose figures.

When Mr. Redmond joined the company from Revlon a year ago, his priority was to share Gap Factory's story with consumers -- that it was not a typical outlet store, and that it was not just like its namesake.

"I just felt a very strong need, personally, to craft that voice – for people to know that we're different," said Mr. Redmond. "To get the word out that there's another layer to Gap that you haven't heard of." 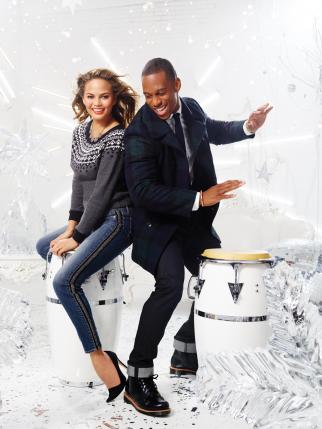 To establish Gap Factory as a fashionable outlet for men and women, he turned to big names like George Kotsiopoulos, co-host of E!'s "Fashion Police," who serves as the brand's exclusive stylist, as well as Los Angeles Dodgers centerfielder Matt Kemp and supermodel Carolyn Murphy, who were featured in Factory's fall campaign.

"Exclusively Styled," which launched in spring 2014, features a new collection, campaign, and shopping experience – adding a different layer of media and plan of execution every season. In the spring, Mr. Kotsiopoulos came on board to establish a fashion-forward collection, the summer focused on female shoppers, and the fall brought on athletes to spread the brand's message.

Gap Factory also rethought its in-store experience, which didn't always get great feedback, said Mr. Redmond. Like many outlet stores, it was large and cluttered. Now, "Exclusively Styled" is prioritized throughout the store -- it's the first thing shoppers see. The campaign's creative also hangs above the featured merchandise so shoppers can easily find the styles they see in the ads.

"We cleaned up the space, so the shopper can visually see our looks and inquire about the price in a more modern way," said Mr. Redmond.

It looks like Gap Factory's changes are having an impact. The outlet saw an average increase of 5% to 7% in store traffic this year, compared with an average of 2% to 3% in previous years, said Mr. Redmond. Gap Inc.'s communications team later said the percentages were inaccurate and that Gap does not reveal sales or traffic figures by channel.

"Exclusively Styled" is an in-house effort by Gap Factory.