GM's Barra Ventures Back Into the Spotlight

Appears at Clinton Global Initiative, Lands Time Mag Cover Story
READ THIS NEXT
How Peloton is tapping into Olympics fever without a sponsorship

After months of blistering criticism, lampoons and scrutiny of General Motors, CEO Mary Barra is venturing back into the media spotlight after an initial rush of positive publicity early this year when she became the first female CEO of a major automaker. 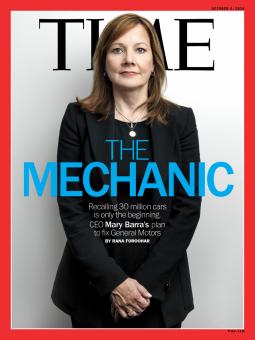 Ms. Barra made appearances in New York this week, and is now the subject of a 4,200-word Time magazine cover story. GM said that with new products and technologies coming out, it has a lot of stories to tell.

"We have a lot of new things to talk about and good opportunities to get out and tell our story," a GM spokesman said.

In her first public appearance outside Detroit since testifying before Congress in July, Ms. Barra sat among Chelsea Clinton and Jack Ma, Alibaba Group Holdings chairman and founder, in New York City on a panel hosted by the Clinton Global Initiative, a nonprofit run by Bill Clinton. Ms. Barra later accepted an award from the Appeal of Conscience Foundation, which focuses on global religious freedom and human rights, for "encouraging a standard in which corporate America and global corporations accept responsibility," Bloomberg reported.

'Bumpy ride'
Bringing Ms. Barra to the forefront even more is the Time cover story: "Mary Barra's Bumpy Ride at the Wheel of GM."

Ms. Barra recalled the moment she found out about the ignition-switch glitches. GM Exec VP Mark Reuss called her on her way home from work. He said it was a significant problem and the automaker would have to make many recalls.

"And then I literally can't remember [what happened next], because there was a period of probably 30 days where -- I don't want to say it was a blur -- but things were happening so quickly as we started to look through what we needed to do," Ms. Barra told Time.

She said the day she read Anton Valukas' report was one of the saddest of her career.

"The most frightening part to me was that [the report] said everything that everyone's criticized us about" over the years. "It was like a punch," she told Time.

After Ms. Barra testified on Capitol Hill in April, her vague answers to lawmakers' plaguing questions about GM's ignition switch defects turned into an opening skit on "Saturday Night Live."

Now Barra's goal is to make GM vehicles the safest in the industry, she told Time. GM has already implemented about 90% of the recommendations from the Valukas report, restructuring operations to prioritize safety and creating a more open environment for employees to discuss issues.

'A real car guy'
Many believe that Ms. Barra, a 34-year GM veteran, can give the dysfunctional culture a new face. Legendary investor Warren Buffett last week told a Detroit audience that he thinks GM is a strong company, especially since Ms. Barra's appointment as CEO. He upgraded his 2006 Cadillac to a 2014 Cadillac XTS after a meeting with her.

"Mary is a real car guy," Mr. Buffett said. "I was enormously impressed with her."

--Hannah Lutz is a reporter for Automotive News

How Peloton is tapping into Olympics fever without a sponsorship