General Motors CEO Mary Barra said she was surprised by the wave of media attention that followed her appointment as the first female CEO of a major global automaker about a year ago, saying that it reflects a backward view of the automotive industry.

In an on-stage conversation with Automotive News Editor-in-Chief Keith Crain, Ms. Barra reflected on everything from where she finds peace and quiet -- at the grocery store -- to her approach to firing employees and her whirlwind first year as CEO, which began exactly one year ago and included a deluge of safety recalls.

"The biggest surprise was what the rest of the world and other industries thought of the [automotive] industry, that it was so stunning," Ms. Barra said during an appearance at the Automotive News World Congress Wednesday. "I think they don't know us very well. I think they had us back 20, 30 years."

• She said the Buick Avenir concept that GM showed Sunday on the eve of the Detroit auto show is a buildable model. Ms. Barra said GM's design division, led by design chief Ed Welburn, works closely with engineering to design realistic concepts that could go into production should GM decide to greenlight them.

Mr. Welburn "works so well with the engineering organization that when we do a concept vehicle, they know what it takes," she said. Asked whether GM will produce it, she said: "I don't know." 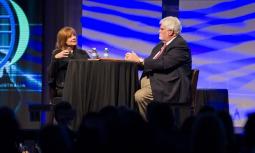 • Ms. Barra defended Chevrolet's $600 million sponsorship of British soccer club Manchester United. Critics have questioned whether the deal makes sense after GM's decision in late 2013 to pull the Chevy brand out of Europe. She said that soccer fans in China and the U.S., especially young ones, follow the team.

• GM's decision to move Cadillac's senior leadership team to New York was "a recognition of where we want to take Cadillac, to be a true luxury brand."

"We want to seize the opportunity of where global brands and luxury brands are and to bring that energy to" Cadillac, she said.

• Ms. Barra has personally fired "many" employees, and takes responsibility for doing so, just as she would commend workers for their success. GM dismissed 15 workers in the wake of an investigation into last year's recall of a faulty ignition switch that is linked to at least 45 deaths.

"I served in HR for a short period of time when we came out of bankruptcy. I had to have many difficult conversations," she said. But she said she does it in a way that allows the person to "maintain their dignity."

Over her tenure as CEO, she said, she has become "tougher, not meaner."

• She dismissed the notion that she may have had inklings about the extent of the ignition-switch issue before she was notified in January 2014. The question, she said, "was asked and answered."

• Ms. Barra said she and her family have adjusted to her sudden celebrity status. She said her school-aged son and daughter "made it very clear that 'Mom' is the job they're evaluating me on."

She acknowledged that strangers will approach her on a Saturday morning at Target when she's shopping by herself. But she likes the unsolicited encounters more than she dislikes them.

"You'd really prefer people to not recognize you," she said. "But they come to you and say, 'Hey, I'm really excited about that vehicle.' The support, even from strangers who recognize me, has been overwhelming."

The times where she goes incognito are just fine with her, too. "When I'm out grocery shopping, it's me and the cart."

But even while making those forecasts, Ms. Barra acknowledged that the best-laid plans can quickly get sidetracked. "A year ago," she said, "we would have never been able to predict what we faced."

Mike Colias is a writer at Automotive News