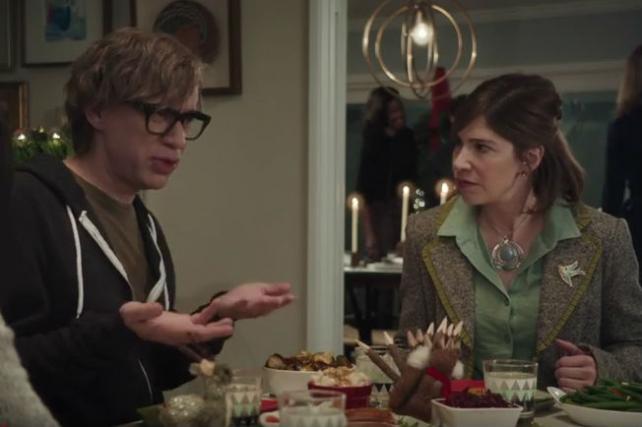 This holiday season, Old Navy is putting "a bird on it." No, not really. But it is tapping the duo behind the hit series "Portlandia," responsible for the "Put a Bird On It" and "Artisanal Knot" sketches, for its holiday campaign. Fred Armisen and Carrie Brownstein will promote the Gap Inc.-owned brand in a campaign beginning this month.

The first spot features the actors relegated to the dreaded kids' table for a holiday party because of their "drab" clothing. A precocious prepubescent, clad in a fashionable shawl-collar sweater, advises the duo to visit Old Navy and get themselves some "clothes that scream holidays." A two-minute, long-form version of the video will debut online on Tuesday, with a 30-second clip airing on Dec. 6. The San Francisco-based brand will continue to broadcast a series of episodes from the narrative throughout the season, according to Chief Marketing Officer Ivan Wicksteed.

Mr. Armisen and Ms. Brownstein follow in the comedic footsteps of previous spokeswomen including Julia Louis-Dreyfus and Amy Poehler. Chandelier Creative worked on the campaign.

Tapping the actors of "Portlandia," an Emmy-nominated satircal series known for poking fun of hipsters, is part of Mr. Wicksteed's strategy to make Old Navy trendy again. He noted that three years ago, the brand "was in the clothes-by-the-pound business, not about style credibility." He's "trying to make the brand cool again," he said.

The media buy for the campaign is on par with last year, according to Mr. Wicksteed, but a bigger portion will be dedicated to digital. About 20% of advertising spending goes to digital -- three years ago, that amount was negligible. The brand produces content for multiple deliveries -- there isn't a one-size-fits-all policy, he added.

In 2014, Gap spent $145 million on U.S. measured media for the Old Navy brand, according to Ad Age's Datacenter.

Indeed, even parent company Gap is putting more dollars into Old Navy's marketing budget. On a third-quarter earnings call earlier this month, CEO Arthur Peck said, "Even though marketing dollars were down in the quarter, they definitely were not down at Old Navy." He noted that the brand will see more radio in its marketing for the fourth quarter. For the quarter ended Oct. 31, same-store sales at Old Navy were up 2%, while sister brands Gap and Banana Republic saw declines.

Old Navy is also in the process of upgrading its brick-and-mortar store experience for customers. The brand recently renovated its 34th Street store in Manhattan, and plans to open a Times Square flagship in 2017. The company is exploring the idea of a concept store, similar to a showroom where customers can make purchases that will be delivered to their homes, but no inventory is kept on site.