Procter & Gamble has turned to the New England Patriots to help push back against Tide Pods eating and one of the hottest brands in consumer packaged goods has signed its first ad agency of record. But first we start with some sobering news out of Ireland …

Buzzless brews pick up steam
You know non-alcoholic beers are gaining traction when Guinness gets involved. As the Irish Times reports, the brand is introducing Pure Brew, its first non-alcoholic craft lager in Ireland. It will hit 250 pubs in the capital this month, the paper reported. It comes as young people drink less. In Ireland, alcohol consumption has dropped 25 percent since 2005, the Irish Times reported, citing figures from the Alcohol Beverage Foundation of Ireland. Pure Brew follows the introduction of Heineken 0.0 in Europe last year, with, you guessed it, zero alcohol. A Heineken spokesman confirmed the brand is considering bringing it to the U.S. Guinness is not currently eyeing a non-alc beer for the states, a spokesman says. Up north in Canada, however, Budweiser last year intro'd a new non-alc beer called Budweiser Prohibition Brew.

Halo Top scoops up an agency of record
Ice cream brand Halo Top named agency and consultancy Wolfgang as its first agency of record. The agency selection comes as Halo Top, an Ad Age Marketer of the Year, continues to broaden its outreach amid growing competition in the lower-fat, lower-calorie, higher-protein ice cream segment. Last summer, it ran an online campaign from Red Tettemer O'Connell & Partners, followed by a 90-second spot featuring a woman being force-fed ice cream, directed by Mike Diva. Wolfgang says it will work on Halo Top's strategy, creative and production. The agency's first work is expected to break later this year.

Just a massage, no more, please
If your massage brand is in crisis following more than 200 allegations of sexual assault and an investigation by the Illinois Attorney General, perhaps touting offerings that go beyond those initially agreed-upon might not be the best course. Massage Envy didn't get that memo. The Scottsdale, Arizona-based chain, which is composed of franchises, sent an email to customers Wednesday that began, "Why our services go beyond just a massage." Doubtful many consumers read through to find out what exactly those extra services entailed. To be fair, the email linked to a video of a female masseuse talking about how she listens to clients. But the brand should have used a better intro, considering the context.

Tide enlists Gronk to battle Pods abuse
Beset by the social-media meme around eating Tide Pods, Procter & Gamble Co. has enlisted an old favorite pitchman from last year's Super Bowl, New England Patriots tight end Rob Gronkowski, to forcefully tell people to "Use Tide Pods for washing, not for eating." The video has grabbed 6.1 million views via Twitter, but a lesser 34,000 or so on YouTube, which is somewhat unhelpful in supporting the message by following it in autoplay with a video about a candy company that makes sweets resembling Tide Pods, and another of someone taking the "Tide Pods Challenge" by putting the toxic laundry product in his mouth.

Pampers gets moms wet to prove point
On a happier note for P&G, the company's biggest brand and the best-selling U.S. diaper brand, Pampers, has teamed with WhatsUpMoms, billed as YouTube's leading parenting channel with 1.9 million subscribers, for a #SleptLikeThis campaign. In the video, the WhatsUpMoms team sneaks into homes of expectant mothers at night to pour water on them as they sleep. The point is to help them develop empathy for their soon-to-be newborns and point out the value of really absorbent disposable diapers. It falls into the "don't try this at home category," but not nearly so risky as putting Tide Pods in your mouth.

Freshii at it Again with Latest Letter to Rival
Freshii Inc.'s latest marketing tactic is another open letter to Subway from CEO Matthew Corrin. In the letter, which ran as an ad on the back of the Chicago Tribune's print business section Wednesday, Corrin proposes a plan for certain Subway stores to be converted into Freshii ones. If that sounds familiar, it's because Freshii has used open letters in the past, including one to Subway last March that ran as an ad in Canada's The Globe and Mail. In 2016, Corrin posted an open letter on Medium aimed at wooing franchisees with failing frozen yogurt shops or juice bars to his brand. And in 2015, Corrin posted one to McDonald's CEO Steve Easterbrook, suggesting a single co-branded restaurant. In the latest letter, Freshii highlights reports of more than 900 Subway locations closing, falling visits to stores and upset franchisees. Corrin also quotes Subway's late co-founder, Fred DeLuca, and says he liked to spend time at Freshii's restaurants. Freshii also tweeted at Subway numerous times on Wednesday. As of press time, Subway had not responded.

Huge wake-up call
Mattress company Casper has a new chief marketing officer after a search that apparently encompassed its own lead creative agency. Casper has hired Jeff Brooks, global president and CMO at the agency, Huge, which began working with the mattress seller late last year, to fill the role. Huge has no plans to replace Brooks. 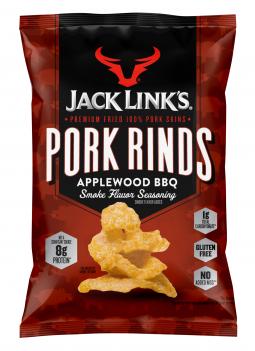 Would You Buy This?
Jack Links jerkey brand is getting into the pork rinds business.

2025: The year by which McDonald's aims to get all its consumer packaging from renewable, recycled or certified sources, and to recycle packaging at all McDonald's restaurants.

Moves
Nothing to report this week. Everyone apparently stayed put.