Evolve Takes Message to Both Sides of Gun Debate
READ THIS NEXT
Chipotle cosmetics are back, and Elmo cleans up for SC Johnson: Trending
Advertising Age Player

Gun safety advocacy group Evolve is spreading its own version of "stop, drop and roll" and "friends don't let friends drive drunk" to gun owners. The nonprofit is rolling out a new ad campaign this week that uses star power, humor and media prowess to push its call to action to Americans: "clear it, check it, lock it."

The campaign is designed to sidestep the gun debate by selling safety as something all Americans should support. Evolve co-founders Jon and Rebecca Bond, who both have marketing backgrounds, are applying lessons from their agency and consulting days to push that message.

"After Newtown," said Ms. Bond, referencing the fatal 2012 shooting at Sandy Hook Elementary School, "what was perplexing to me is that we couldn't sell guns and sell safety. ... We need to make safety aspirational."

In the spot, Mr. Lucas walks down a Main Street telling viewers how wonderful America is, except for accidental shootings. Meanwhile, a hamburger, a street sign and other objects around him are shot. Mr. Lucas even takes a hit while wearing a bulletproof vest. He thanks gun owners for being responsible -- most are, according to the spot -- and tasks them with making sure others follow suit. 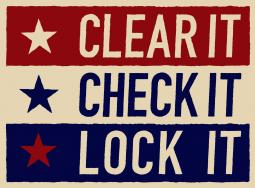 "[Erwin Penland] had this brilliant idea of treating a terribly difficult subject with a sort of gentle humor," said B-Reel's Simon Cole, who directed the spot. "It had the combination of a great idea that wasn't preachy but was also attached to a movie star that had the intelligence and the ear of women and the respect of men."

"This says, 'Hey America, we can all take this on,'" said Ms. Bond. "We're trying to give [people] ways into the conversation [about gun safety] that makes it comfortable in their environments."

Evolve tapped Mr. Lucas, for his Southern charm and every-man feel, according to Mr. Cole. Effects folks from shows like FX's "Sons of Anarchy" worked on the spot, as did Kilt Studios, which handled the visual effects, and Arcade Edit.

The ad is expected to run on CBS, Outdoor Channel and online. The push also includes a website refresh; digital download kits with materials for gun ranges, clubs and retailers; PR and influencer outreach; print and social components; and an online petition to make National Gun Safety Day formally recognized. As a nonprofit, the group is leaning heaving on favors for the effort.

Mr. Lucas also plans to use his starpower to spread the word with a PR tour that could bring Evolve's message to national stages like Comedy Central's "The Daily Show" and HBO's "Last Week Tonight with John Oliver." "My hope is that we drive this everywhere," Mr. Lucas said. "Somebody is not going to die because of this commercial and that's insane."

Erwin Penland also wants to go beyond the liberal media to reach gun owners who may lean conservative. The organization is bypassing the political debate surrounding gun control and second-amendment rights by stating that it's simply "pro-alive kid."

"This should be the big duh," said Con Williamson, chief creative officer at Erwin Penland and a former creative at Saatchi & Saatchi, where he worked on Evolve's first ad campaign. "I want people supporting it who aren't on one side of a political view. I want people who talk about guns and share guns. I want the NRA to begrudgingly say, 'Goddammit. This is good.'"