Clever Digital Campaign From McCann Focuses on Co-Workers
READ THIS NEXT
Anheuser-Busch strikes deal with Travis Scott, and The Rock’s new tequila is on fire: Trending 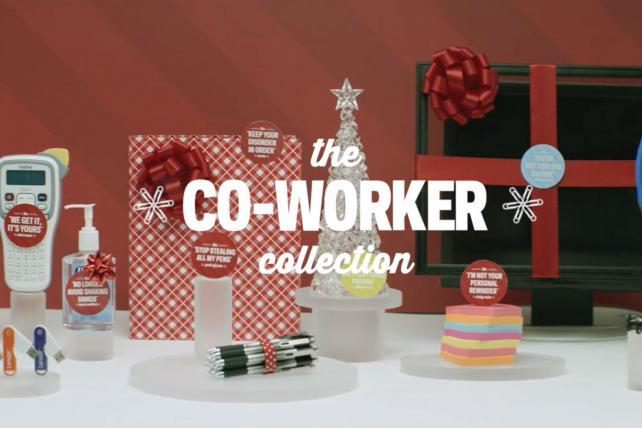 Office Depot is making the most of its merchandise by promoting ordinary items like pens as thoughtful gifts for co-workers in a series of clever ads. In one spot, a germaphobic executive is given hand sanitizer. In another, a keyboard-drumming music lover is given headphones.

Dubbed the "Co-Worker Collection," the campaign was created by McCann, which has been the Boca Raton, Fla.-based office supply provider's agency of record for about a year. It marks a departure from last year's holiday message, when Office Depot promoted business-to-business gifting. Like last year, the campaign will be entirely digital, with spots airing in stores and online. Customers will also be able to pick-up "Co-worker Collection"-themed stickers in stores and create their own online.

"It's a new, unexpected way to use office gear," said Tim Rea, exec VP-CMO, who is hoping the campaign will go viral. Through a survey, the company found that over 80% of workers will be buying gifts for a coworker or boss this year.

"The truth is, we all know our co-workers scary well," said Tom Murphy, co-chief creative officer at McCann New York, noting that anyone who has ever worked in an office could relate to the promotion. "We created a campaign that has a bit of fun with these co-worker quirks and idiosyncrasies."

Though Mr. Rea could not disclose what the 29-year-old firm is spending on the campaign, he noted that it's a significant increase from last year. In 2014 Office Depot spent $62.9 million on U.S. measured media, down 40% from 2013, according to Ad Age's Datacenter.

Two years ago, the company acquired rival OfficeMax. And the category's consolidation is expected to continue. Earlier this year, Staples announced it plans to acquire Office Depot in a $6.3 billion deal that was initially expected to close by the end of 2015. That timeline is down to the wire as the Federal Trade Commission now investigates the merger.