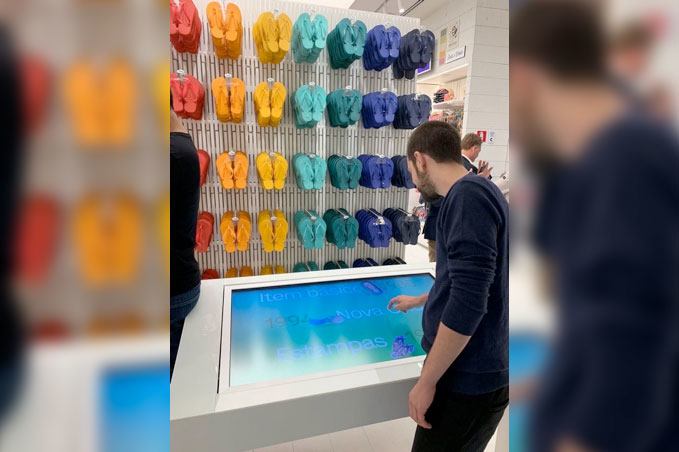 U.S. consumers might be in the throes of winter but Havaianas is already in a summer state of mind. The flip-flop brand recently tapped Work & Co for a redesign that includes remodeling its physical store approach into a testing lab for the brand.

Called a Havaianas Lab, a new 900-square-foot store recently debuted in São Paulo, Brazil. A similar store, a redesign of an existing outpost for the brand, will open in London next month.

The new stores include smart changing rooms and interactive screens that illustrate styles available and brand history. A far cry from the low key mall kiosk-type outposts consumers might have seen before from the 58-year-old footwear company, the changes are part of Havaianas’ attempt to raise brand awareness globally.

The initiative follows a marketing push last summer in which street artist Buff Monster created a shoppable mural in Venice Beach as part of a “Step Into Summer” campaign with San Francisco shop TBD.

"As the Havaianas brand expands globally we’ve been launching a range of initiatives to support that growth, including bold new creative and experiential campaigns,” said Fernanda Romano, chief marketing officer at Havaianas parent company Alpargatas, in a statement. She noted that consumers can “play” with the brand in the new stores and explained that Havaianas​​​​​​​ is focused not just on marketing but on improving its brand experience in order to retain loyal customers.

Havaianas​​​​​​​, which came to the U.S. in 2007, began working with Work & Co last year after the Brooklyn-based agency won a quiet pitch for the project. The brand has been moving beyond footwear into accessories like beach apparel, sunglasses and bags. Havaianas​​​​​​​, which is also expanding in the travel retail space with a recent pop-up at Changi International Airport in Singapore, declined to say how many more stores are in the works this year.