P&G Brand Will Try #Whiff Hashtag, Game Integrations, TV and Subway Wraps in MLB Campaign
READ THIS NEXT
Fall TV season heats up and Nike reports earnings: The Week Ahead

Marketers generally try to avoid striking out and play it down when they do. But Procter & Gamble Co. wants to own the moment – all 35,000-plus times it happens in Major League Baseball this year – as part of a campaign behind Head & Shoulders with Old Spice. 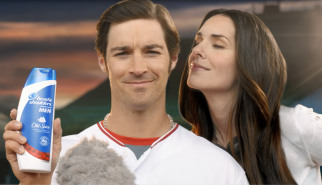 Playing on the double meaning of scent and strikeouts, Head & Shoulders bills this the "Season of the Whiff" in a new TV, digital, social, brand-integration, outdoor and cause-marketing effort. Besides 15-second spots breaking April 1, a "Whiff of the Game" segment will be integrated into game broadcasts on regional sports networks in 11 markets, and the brand will encourage fans to use the #Whiff hashtag with their team's Twitter handle each time a pitcher strikes out an opponent.

P&G will give $1 for each strikeout to Reviving Baseball in Inner Cities and fuel social media by giving the MLB club whose fans rack up the most #Whiff tweets monthly an additional $10,000 for local chapters.

Head & Shoulders also will do a wrap and interior ad takeover of the No. 7 train from Manhattan to Citi Field in Queens for all of June and July built around the All-Star Game to be played there.

The brand has Los Angeles Angels of Anaheim pitcher C.J. Wilson as its pitchman, though his teammate, outfielder Josh Hamilton, appears with him in one ad. Those were set in Cincinnati's Great American Ball Park, since the Angels will play the Reds there starting April 1 in the first inter-league opening day matchup.

The strategy behind the brand mashup is that one of the biggest barriers people have to buying Head & Shoulders is the belief "that it's a medicine and therefore can't smell very good," Mr. Sabbia said.

Besides disabusing them of that belief, he said, "We would love if by the end of the season fans, sportscasters and everyone are no longer calling them K's or strikeouts but calling them whiffs and associating that back to Head & Shoulders."