Heineken to Stop Selling Desperados Tequila-Flavored Beer in the U.S.

Brew Is a Hit In Some Global Markets, but Not Here
READ THIS NEXT
What it's like to attend an in-person industry conference again (mask optional) 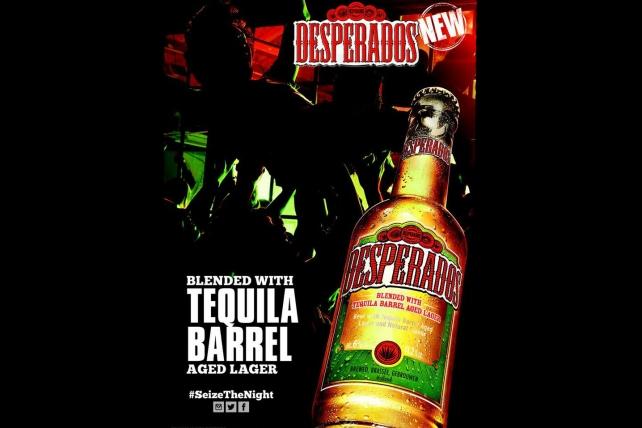 Heineken USA is ending its tequila-flavored beer experiment. Desperados, a lager aged in tequila barrels that launched in the U.S. in 2014, will be discontinued, the marketer confirmed Wednesday.

"We're shifting our focus to continue amplifying our four priority brands of Heineken/Heineken Light, Dos Equis, Strongbow & Tecate," a Heineken USA spokesman said in an email. "Desperados is a great brand that's growing globally, but domestically, we want to remain laser focused on those four."

Desperados, which is sold in 85 international markets, had been handled globally by Wieden & Kennedy. But that relationship ended this past summer at the same time W&K's contract for the brand Heineken account was terminated. On Wednesday Heineken announced that it appointed Amsterdam-based agency We Are Pi to be its lead global communications partner for Desperados, which is especially popular in France.

"Desperados is a beer born with tequila – this unique proposition defines the brand's challenging attitude," Walter Drenth, Heineken's senior global director for international brands, said in a statement. "We were looking for a fresh creative partner with profound understanding of our target audience and the bold attitude which the brand deserves. We are convinced We Are Pi's approach makes it a perfect fit with our brand philosophy."

Heineken USA began Desperados' U.S. rollout in Florida and Georgia, with plans to begin nationwide distribution in 2015, and referred to it as a "spirited beer." It has 6% alcohol by volume, and is made by combining lager that's been aged in tequila barrels with beer that includes tequila and lemon flavors. While the product has trace amounts of tequila, it is technically classified as a malt beverage.

The launch advertising in the U.S. used a campaign that was running internationally at the time, created by the agency Dufresne Corrigan Scarlett, an independent shop based in Paris. The campaign, called "At Dusk, We Rise," included two TV spots that were full of music and dancing. Digital and out-of-home ads were also used.

But Desperados remained a regional brand with the Southeast being the main focus area, the Heineken spokesman confirmed. The discontinuation "will bring more simplicity to our teams and how they manage the HUSA portfolio in the field, while also adding some efficiencies to the supply chain with our distributor and retail partners," he said.

Earlier this year, Anheuser-Busch InBev introduced its own tequila-flavored beer in the U.S. called Oculto. The brand is available nationally, but the focus market is Miami.