There are plenty of toppings on a Chicago-style hot dog and one that's clearly absent: ketchup.

For the uninitiated, a Chicago-style hot dog, preferably tucked into a steamed poppyseed bun, is topped with yellow mustard, an almost neon-green relish, chopped onions, tomato wedges, a pickle spear, sport peppers, and a dash of celery salt. And asking for a hot dog with ketchup at some Windy City establishments will get you an order of side eye.

But ketchup is a critical product for Kraft Heinz, which has one of its two headquarters in Chicago thanks to its 2015 takeover of Kraft -- the other is in Heinz's hometown of Pittsburgh. While the company's been promoting Heinz yellow mustard for a couple of years, ketchup is still king.

So ahead of National Hot Dog Day, which falls on July 19, Heinz played on the city's ketchup-on-hot-dogs hatred with the introduction of a "Chicago Dog Sauce" made with tomatoes, spices, and flavorings. That's right: it's just ketchup. Some Chicagoans fell for the prank as they ate they red sauce, which was served from containers emblazoned with the city's flag. 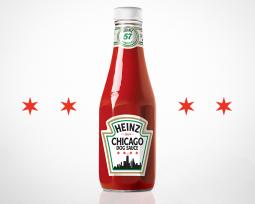 Special bottles are also set to be sold for $5 plus shipping & handling at chicagodogsauce.com, with a campaign that includes print, out-of-home ads, and product sampling in the Chicago market.

The push comes from David Miami, whose past work on Heinz includes the "Wiener Stampede" spot that aired during Super Bowl 50, along with Alison Brod Marketing & Communications, Starcom Chicago, and PureRED | Ferrara. 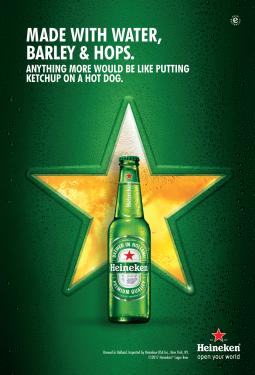 Heineken has its own take on Chicago's no-ketchup obsession. The beer brand has been running billborads in the city stating "Made with water, barley and hops. Anything more would be like putting ketchup on a hot dog."