Presidential Hopefuls Aim to Build Buzz With New Swag
READ THIS NEXT
Make it a Blockbuster night by booking an in-store sleepover on Airbnb
New Hillary 2016 backpack geared toward college students.
Credit:

With the first day of classes looming, back-to-school shopping is well under way for parents, students and retailers. And now politicians are getting in on the action. Democratic presidential frontrunner Hillary Clinton is pushing her gear, including backpacks, bottle openers and plastic cups, to college students as they prepare to return to campus.

The collection -- advertised as "back to school basics" on Ms. Clinton's website -- features new arrivals such as a "She's Got Your Back(pack)" knapsack for $65; a $40 cell phone case; a $50 "College Pack" with a t-shirt, plastic cups, buttons, stickers and other items -- "supplies for the semester ahead!" -- the site crows; and the more affordable, $20, "Party Pack" complete with a bottle opener keychain and fake gold tattoos -- to really get that campus mixer started.

College students are a key demographic for Ms. Clinton who recently announced a plan to help families pay for college and reduce interest rates for existing student loans.

Other presidential hopefuls, including Republican candidates Rand Paul and Donald Trump, are also using e-commerce to generate buzz among young people. Mr. Paul's campaign store, which has a section devoted to anti-Hillary items like a $99.95 erased email server dubbed "Hillary's Hard Drive", stocks a bag toss game, an NSA spy cam blocker and t-shirts designed by contest winners, including one with Mr. Paul's face that reads "Liberty Bro." The online shop also sells cell phone cases and skins for MacBooks and Beats headphones, among dozens of other products. 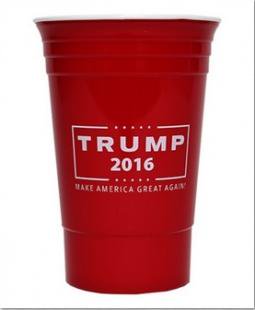