Partnering With More Athletes and Celebrities, Dick's Aims To Show Benefit of Sports
READ THIS NEXT
Chipotle cosmetics are back, and Elmo cleans up for SC Johnson: Trending

For a group of kids in Harlem, lacrosse has become a lifestyle.

Depicted in two new national spots from Dick's Sporting Goods set to premiere on Wednesday, the Harlem lacrosse team has become the latest beneficiary of the retailer's program, Sports Matter.

In 2014, the program began as an effort to promote awareness and funds for youth sports in the U.S. In it's second year, Dick's, along with agency Anomaly, elected to continue to focus on stories about youth sports teams that were facing potential cuts to their funding. In its first year, Sports Matter raised approximately $4 million to benefit 184 teams.

"We knew there was a huge need," said Ryan Eckel, Dick's VP-brand marketing. "We launched the program, and it was by all measures, phenomenally successful for us."

The spots breaking this week are meant to both encourage participating in youth sports, as well as activism. Youth sports have been on the decline in the U.S., according to data from Up2Us. By 2020, roughly 27% of public high schools will not have any sports teams.

This year's program features a new partner in donorschoose.org, an online nonprofit organization that provides materials and funds for teachers and schools that have seen budget cuts or, in general, cannot afford certain goods. The organization will soon open a tab for teams and sports, which after they are vetted by donorschoose, can raise funds through the site.

Once a team that is a part of the Sports Matter program raises half of its goal, Dick's will match the dollar amount up to $1.5 million.

"At the end of the day, we focus in on amateur sports," said Frank Igrec, brand director for Dick's. "The root of our belief is that we believe sports make people better. That's our brand philosophy."

The spot features the story of the Harlem lacrosse team, and particularly one player's struggle on and off the field, as he deals with the recent death of his mother. Alex Kaplan, senior art director for Anomaly, said the spots are meant to be relatable for young athletes.

"It's very refreshing to be able to tell a story that feels so true to both what we're trying to do with Sports Matter and Dick's Sporting Goods in general," said Barry Katz, senior copywriter for Anomaly.

The retailer spent more than $84,000 on measured media in 2014, according to Kantar Media. 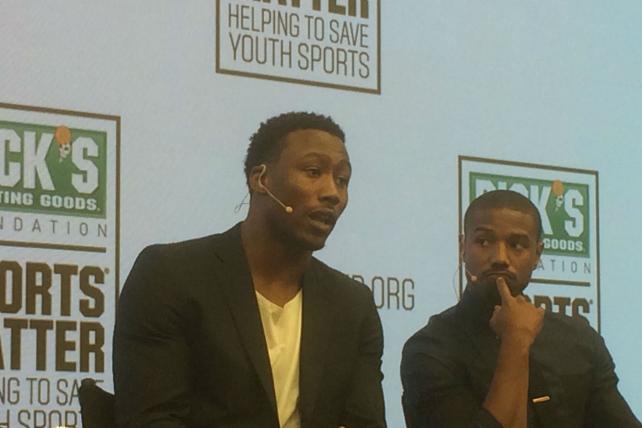 New York Jets' Wide Receiver Brandon Marshall and actor Michael B. Jordan were participants in a panel discussion of the importance of youth sports in Times Square on Tuesday.

The commercial debuted Tuesday at a panel discussion in New York, hosted by Dick's, which featured celebrities and professional athletes debating the future of American youth sports. ESPN analyst Jon Gruden, actor Michael B. Jordan and New York Jet Brandon Marshall were all present. The Harlem lacrosse team was the first beneficiary in the program's second year, receiving a check for $25,000 Tuesday.

"Football and sports saved my life," Mr. Marshall said during the panel. "We really need to focus on sports, because for most [kids], that's their only way out."