When Home Depot's public-relations and marketing teams sat down to talk about how to make the retailer's holiday marketing stand out in the social space, the discussion naturally turned to cats. 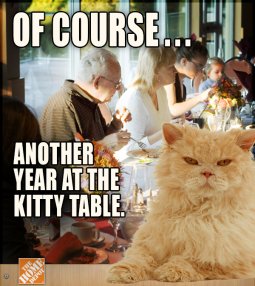 Yes, cats. "Everyone has elves, reindeer, Santa, but one of the biggest things followed in the social space is cats," said Trish Mueller, Home Depot's chief marketer. "When I shared this with our leadership team, our CEO got it immediately. We're very lucky we have one of the hippest CEOs out there."

And so was born Richard the Cat. Described as quick-witted and sarcastic, on his Tumblr page Richard says his family is "'how-to helpless' -- especially around the holidays." With that in mind, Richard will document his family's disasters for consumers' enjoyment during the holiday season. He'll also be tweeting @RichardTheCat and photo bombing customers posing with their Christmas trees at Home Depot's in-store Social Booth. There are also plans for Richard to pop up on Facebook, Pinterest, Instagram and Foursquare. Home Depot is working with Carrot Creative on the project.

Managing Richard's online persona is "a joint effort between our public-relations and social teams," Ms. Mueller said. "We're thinking through content in each channel. And we're thinking about how to engage [store associates]."

Home Depot also has an extensive partnership with BuzzFeed planned. Richard content will appear in story units, as well as in a viral thumbnail, while the home page will be outfitted in Home Depot orange next week. The content partnership will run through Dec. 19.

It's an unusual approach for a home-improvement brand, but Ms. Mueller said it will help the the home-improvement chain come to life while adding a bit of humor. Richard will be engaged with topics like holiday decor, she added, and there will be more-traditional, cat-free holiday executions for digital, TV and print focused on inspiration and seasonal projects.

Ms. Mueller, herself the owner of two dogs, isn't worried about alienating canine lovers. She noted that online engagement with cats is double that with dogs, and said the most important measure of success for the campaign will be the level of sharing done by consumers.

"Our biggest worry is Ricky will be a PR nightmare," Ms. Mueller joked, clearly getting into the spirit of the campaign. "It's hard to say what this cat will do. Depending on how things go, we may let Ricky hang out around after the holidays and give us some help with other projects."