Houston Agencies Cope with Harvey: 'Pray for Our City' 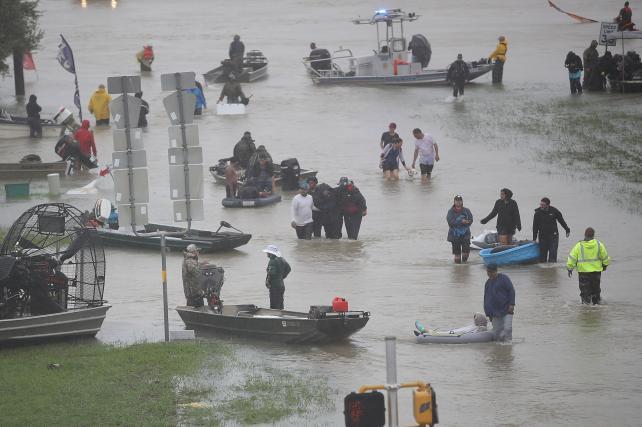 Houston-area ad and PR agencies are among the businesses dealing with the epic storm that has deluged parts of the region with as much as 30 inches of rain since Saturday night. Some agencies remain closed on Monday as the city copes with the havoc wrought by Hurricane Harvey, freeing employees to pitch in on volunteer efforts as rising floodwaters displace thousands of residents, with no immediate end in sight.

Brenda Love, president of independent, Houston-based creative agency Love Advertising, and a native Houstonian, writes in an email that she has never before seen anything like Harvey: "Our client Jim McIngvale of Gallery Furniture opened his two huge stores as shelters [and is] using his furniture delivery trucks to rescue people. Our PR department has been busy getting the word out. Our new building had flooding. Please pray for our city."

The Houston office of PR giant FleishmanHillard was among the shops that shut down. "We're very thankful that all of our employees and their families are safe and out of harm's way," says a FleishmanHillard spokeswoman. The agency has reached out to the Houston Food Bank to offer assistance and is also "providing information to our employees across the country with information on how they can donate to rescue and recovery efforts," she says.

Last Wednesday, Edelman announced internally that it would close the Houston office on Friday so that staff could leave the path of Harvey and prepare their homes for the storm. Staff without family in the state were offered housing in Dallas.

"Since Harvey hit Houston, we have been in touch every 24 hours to check on the safety of our team and their families. Today, some team members who stayed behind and have no flooding issues in their homes are being activated to provide pro bono service to the Houston Public Information Office," says Chris Manzini, head of Edelman's Southwest region. Edelman, adds Manzini, is also setting up a microsite with the Red Cross and will be matching donations from employees via the Daniel J. Edelman Family Foundation.

Cindy Marion, president and founder of data-driven ad shop MMI Agency, says most of its employees have "experienced a high level of impact at the hands of Hurricane Harvey" and many are still without power. As of now, three staffers' houses have been directly flooded and many are tending to flood damage for relatives, neighbors and friends. Marion says she has not yet been able to inspect the inside of its downtown office, but believes it's in good shape based on external camera photos. Hurricane Ike in 2008 destroyed MMI Agency's roof.

"Our team is a group of caring and compassionate folks and many are taking in families whose houses are unlivable, and we are mobilizing to help our city get back on its feet," says Marion. "Houstonians are amazingly resilient. We aren't victims and we'll stand tall very quickly. MMIers will be hands and feet in helping each other and our neighbors." Despite the destruction, Marion says the agency's team continues to service clients from laptops all around the city. 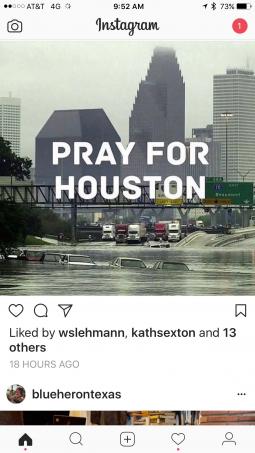 The 93 staffers at Adcetera, a strategic advertising and branding firm, have been in touch day and night since the storm began, says Kristy Sexton, chief creative officer and founder of the agency. "Lots of photos of unimaginable water, slumber parties in closets and pantries, and pets and kids hunkered down with family and neighbors have been flying back and forth," she says.

Once the storm passes, Adcetera employees who are able will return to work and split their time between client business and helping team members who have been devastated by the storm, Sexton says.

After all initial clean-up is over, such as removing debris and trees, Sexton says the agency will partner with larger organizations to help the greater Houston community. In the past, Adcetera has worked with Christian humanitarian aid organization Samaritan's Purse.

Many of the state's best-known agencies are headquartered about 170 miles to the west of Houston in Austin, which has been spared from the worst parts of the storm. But that has not stopped one Austin-based executive from getting intimately involved in recovery efforts. Manny Flores, CEO of Hispanic shop LatinWorks, sits on the five-member, governor-appointed Texas Public Safety Commission, which has given him an up-close view of how the state is responding. Flores was appointed to the commission by former Texas Gov. Rick Perry (now Secretary of Energy), who used LatinWorks for his 2010 campaign.

On Saturday and Sunday, Flores says, he spent multiple hours inside the Public Safety Commission's operations center in Austin. The center, which Flores describes as an underground bunker, has served as a war room for officials coordinating the emergency response to the storm as it continues to deluge the Gulf Coast. "I opened the door and I was truly amazed and overwhelmed to see about 75 to 100 professionals at computers, from every agency across the state and representation from every federal agency coordinating, collaborating and finding solutions to save lives," he says.

Flores is also keeping a close eye on his second home in Rockport, a small coastal town that took a direct hit from the hurricane as it slammed ashore Friday. Flores spent Thursday and Friday boarding up the home. "My home appears to be [mostly] fine," he says. But some of his neighbors, he adds, didn't fare so well. He heard from one friend who opted to ride the storm out, and his small-frame home was "coming off the concrete beams two to three inches and slamming back down," Flores says. "That's horrific."

Flores says his thoughts are with the full-time residents of the town, whose economy is powered by the fishing industry and small business owners. "Their lives have been turned upside down," he says. But "they are very resilient. They are very strong. And as Texans we know they will rebuild."