How brands can make the most of TikTok

Take advantage of trends, connect with influencers and turn up the music
READ THIS NEXT
GMC Hummer EV debuts with 350 miles of range, six-figure price 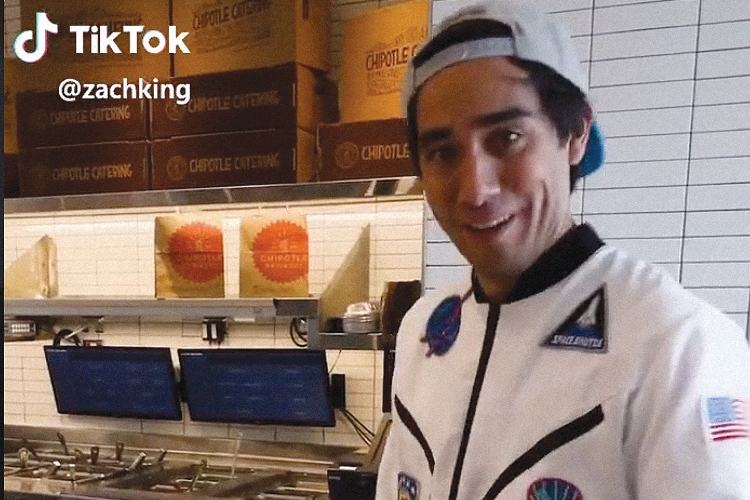 Chipotle worked with Zach King, an influencer with 27.2 million TikTok followers, to promote one of its hashtag challenges.

Kind, Netflix, Chipotle and Walmart have hundreds of thousands of followers on TikTok. Red Bull, Radio Disney and the NBA have millions. Publishers including Complex, Group Nine and The Washington Post have joined because of the potential for engagement. On average, a user opens the app about nine times a day and spends more than 45 minutes on the platform, says Eric Jacks, chief strategy officer for Los Angeles-based studio Collab, which has helped brands jump-start their TikTok accounts.

Perhaps because of that engagement, brands aren’t yet apprehensive about the U.S. government’s investigation into Chinese parent company ByteDance’s collection of user data. It is examining  whether China censors content seen by users in the U.S. or if the app could be used by foreign political interests.

But succeeding on TikTok takes more than tossing around a few “OK, boomers.” And music is almost an essential: When ByteDance bought Musical.ly and combined it with TikTok in 2017, Musical.ly’s lip-synching elements quickly became popular. Now music, especially songs that go viral, drives content sharing. Here’s how brands can make the most of TikTok.

TikTok users don’t want to see perfectly lit products set against filtered backgrounds, as they might on Facebook and Instagram. They want to see how people are really using a product—and sometimes singing along to it.

“If Instagram is all about your aspirational best life, super-polished and filtered, than TikTok is really about being raw, honest and filming in your bedroom,” says Evan Horowitz, CEO of New York-based agency Movers and Shakers, which worked with e.l.f. Cosmetics for its first foray on the platform in October.

Instead of licensing music or using songs that are already trending, in October e.l.f became the first brand to create its own TikTok song with its hashtag challenge #eyeslipsface. Users can select the song, sing along and share with the hashtag.

Chipotle, which has nearly 200,000 TikTok followers, has used hashtag challenges around key events the brand celebrates, including Cinco de Mayo and National Guac Day. Its #GuacDance hashtag challenge in July, for which users shared their own “guac dances,” received 250,000 video submissions and 430 million views in six days.

Chipotle’s in-house team and its agency, Day One, can be in the restaurant and create content for the platform in 20 minutes, says Tressie Lieberman, VP of digital marketing and off-premise at Chipotle. “You don’t have the time to perfect everything on this platform,” she says.

Using trending songs in posts can be just as beneficial as hashtags, says Arman Walia, director of social media at Complex. “With TikTok you use the music and there are certain songs that are going viral,” he says. “So if you use that song, it’ll get on that page everyone is using.”

TikTok’s “For you” section, which appears when users open the app, is where trending content is highlighted. Popular TikTok songs include “The Nights” by Avicii, “iSpy” by Kyle and “Old Town Road” by Lil Nas X (TikTok is where the rapper got his start, after all). Music licensed for TikTok cannot legally be posted to other platforms.

A major component of TikTok is the slew of creators who quickly amassed followings. Most brands that have launched hashtag challenges have also paid influencers to get the ball rolling.

Jacks says influencers are key to getting people to talk about anything. “You have videos that are inspiring other videos and it feels more like a conversation,” he says. “Rather than posting comments, people will see a video, and they will emulate that video with their own personal style or twist. That’s really unique.”

And some brands have succeeded without even trying. Home Depot might not seem like a brand that would fit on TikTok, but it found an audience after its theme song went viral, with users creating their own dances using the brand’s tune. The hashtag #homedepot has had 70 million views and counting, even though Home Depot does not have an account.

Brands are sharing TikTok content to expand campaigns off the platform. For the face of its holiday campaign “Aero Oneness,” Aéropostale is using TikTok star Cameron Campbell
@camodancer94, who has 74,800 followers. He appears throughout Aéropostale’s site, and has his own dedicated page. E.l.f took its TiKTok song #eyeslipsface and expanded it into a regular song and placed it on Spotify.

Kory Marchisotto, chief marketing officer of e.l.f., says the song has been streamed 1.5 million times outside of TikTok and is on 20,000 Spotify playlists. She says “the music has taken on a complete life of its own.”