The meditation brand saw Twitter mentions spike after sponsoring CNN ‘Key Race Alerts’ and airing a 30-second spot of rain falling on leaves
READ THIS NEXT
Beyond Meat jumps on expanded ties with McDonald’s, Yum Brands 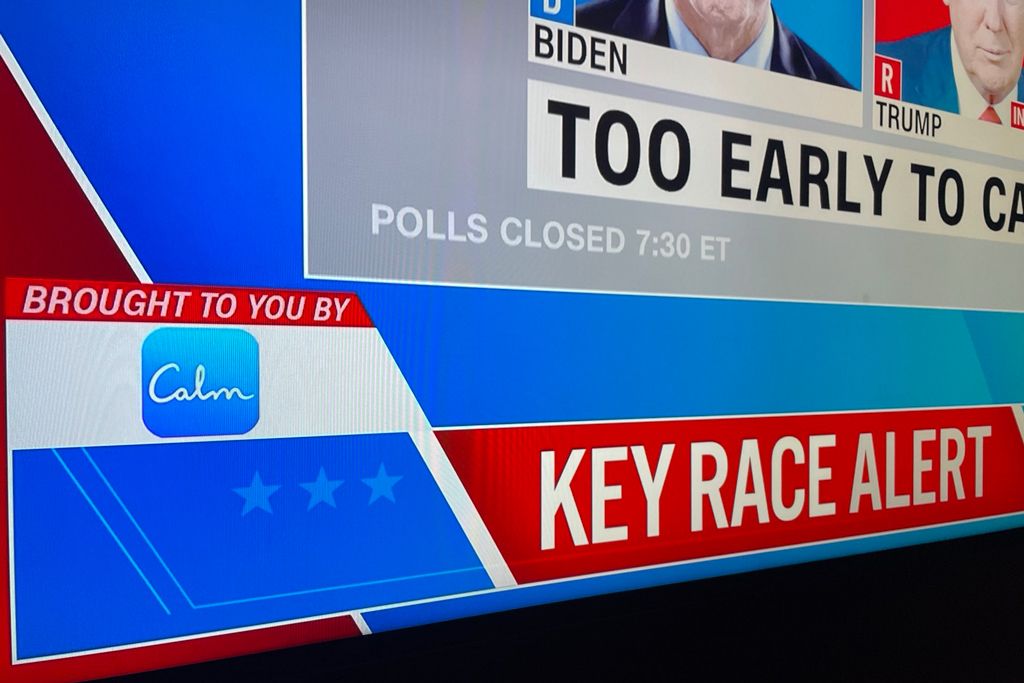 Well, America might not know who its next president is yet, but there was at least one winner of Election Night—the Calm app. With all the stress, frustration and anxiety filling American households Tuesday night as TV networks divulged that results would not be ready until every vote was counted, the meditation app saw an opportunity to stand out and help Americans take a moment to relax.

Calm sponsored CNN’s “Key Race Alerts” throughout the night and ran a 30-second spot during CNN coverage, featuring nothing but rain falling on leaves—of which the brand has an eight-hour version on YouTube for people to listen to as they sleep. Meanwhile, on social media, the brand shared breathing and relaxation exercises for its followers.

Americans loved it, briefly replacing their stress and frustration with humor. And the tweets poured in. According to analytics company Talkwalker, Calm saw 9,700 mentions, a 248% increase from the previous day, generating more than 56,000 engagements. Talkwalker tracked all social media platforms, websites and online forums for mentions of the brand, and found 99.3% coming from Twitter. In the week before Election Night, Calm was averaging 500 mentions a day.

“LOL. Genius. They bought this ad for the RTs and it’s really paying off,” tweeted Alexis Ohanian, co-founder of Reddit and co-founder of venture capital firm Initialized Capital.

LOL. Genius. They bought this ad for the RTs and it's really paying off. https://t.co/wOoCO28Oh0

“We understand the uncertainty of this election cycle can be a source of anxiety for many of us, especially as it coincides with an ongoing pandemic,” says a Calm spokesperson. “Our goal during CNN’s Key Race Alerts was to provide viewers a moment of Calm, and a reminder to take a deep breath during a stressful night.” The brand did not comment on how much the sponsorship and ad placement cost.

Americans are feeling a lot of stress during the election season, on top of what they were already feeling due to the coronavirus pandemic. The coronavirus pandemic has already led to a surge of new users of meditation apps. Online health information news site Healthline.com says site searches related to stress and depression went up 60% in October.

Sentiment around Twitter mentions was 54% positive and 13% negative, with many people finding the sponsorship comical. The word “hilarious” was used in 24% of mentions, according to Talkwalker.

“The CNN ‘key race alert’ being sponsored by the Calm app is the most hilarious thing I’ve ever heard considering I have a mini heart attack every time it flashes on the screen,” said one Twitter user.

Many others shared their opinions.

Brought to you by the CALM app?!?!? I actually lol’d pic.twitter.com/0jQWTOW3CS

The Key Race Alert on CNN being sponsored by the Calm app is just comedy. pic.twitter.com/T6s29UNdrt

Calm app ad has great placement but is also interrupted by election pic.twitter.com/Cywqsow21u

“It just goes to show that this brand read the room and managed to get itself great placement, and better still it was well received by viewers,” says Todd Grossman, CEO at Talkwalker. “If the moment fits what your brand is made for, don't be afraid to seize the opportunity.”

Negative mentions of the app found the sponsorship too heavy-handed or not in line with the event.

calm app sponsoring CNN tonight is the biggest troll of 2020

Some creatives predicted that this entire week would be a good opportunity for relaxation apps like Calm. A day before Election Day, Chris Beresford-Hill, chief creative officer at TBWA\Chiat\Day tagged the app in a post on LinkedIn, writing: “Calm, this would be a good week to offer a free trial to everyone in America.”

While there are no free trials yet, Calm says that since the rest of the week is likely to be just as anxiety-inducing, the brand has placed free mindfulness tools like music and meditation exercises on its online resource hub.