The Hershey brand taps a trio of gold medalists as marketers prepare for the delayed Summer Games
READ THIS NEXT
The D’Amelio sisters hook up with Hollister and IHOP responds to Adam Sandler: Trending 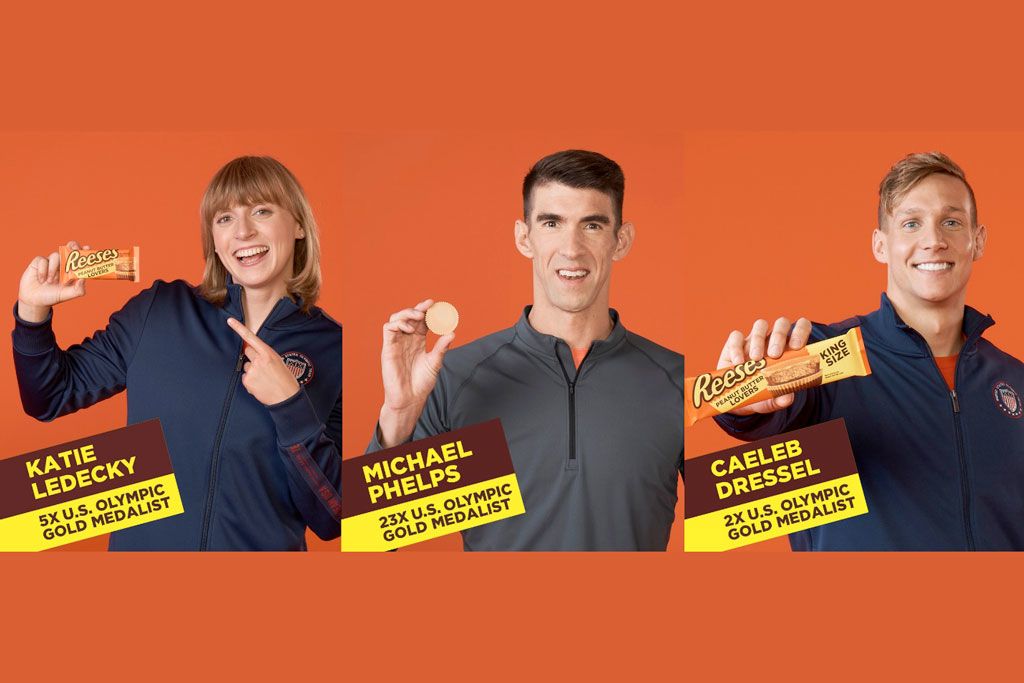 With the 2020 Summer Olympic Games set to begin in 102 days, marketers are preparing to roll out campaigns highlighting the event, which was delayed by a year due to the coronavirus pandemic.

Hershey Co. is early out of the gate among major U.S. Olympic sponsors. But  like all brands backing the games, the candy giant had to get creative to deal with the fact it is launching a campaign a year later than originally planned.

On Monday, it unveiled a 15-second spot starring swimming legend Michael Phelps, a self-proclaimed fan of Reese’s. An original shoot with Phelps was conducted in late 2019. Footage from that shoot was used to develop this campaign featuring a product that wasn’t even out then — Reese’s new Ultimate Lovers Cup, which is now the product being promoted in 2021 following the delay of the 2020 Summer Games. Will Arnett’s familiar voiceover work is heard in the spot, which briefly shows Phelps. As Arnett suggests, the cups don’t need a celebrity to endorse them because they sell themselves.

Phelps, Katie Ledecky and Caeleb Dressel are being introduced Monday as the “Ultimate Team” for Reese’s. Hershey Co., which makes Reese’s, is ready to tap into enthusiasm for the games, which were postponed from 2020 due to the coronavirus pandemic. The rescheduled 2020 Summer Games are now slated to begin July 23.

Hershey has been a Team USA sponsor since 2015 and, like other marketers, had expected to launch an Olympics-themed campaign last year. Such plans were paused as the pandemic led to the postponement of the Games. For brands like Hershey that serve as Team USA sponsors, the opportunity to tie into the excitement around the event is one that is often planned years in advance. Worldwide Olympic partners include brands such as Coca-Cola, Procter & Gamble, Toyota and Visa.

This year, brands must decide how much to emphasize the international sporting event as it is set to go on under new protocols. For one, Japan is hosting the games without overseas spectators. So marketers that in the past have had sponsored areas at the Olympics won't be able to do the same level of hospitality marketing.

“As America’s number one chocolate brand, we couldn’t settle for anything other than the best and that’s exactly why we’ve partnered with these legendary U.S. Olympians: Michael Phelps, Katie Ledecky and Caeleb Dressel,” Margo McIlvaine, brand manager, Reese’s, said in a statement. “These three know exactly what it takes to be the ultimate, and we welcome them to the Ultimate Team Reese’s.”

Rather than focusing on the athletes, though, Reese’s is centering its campaign more on its products. The spot starring Phelps promotes Reese’s Ultimate Peanut Butter cups, a limited-time version without chocolate. These cups were announced in March and are hitting stores this month. They are being promoted alongside Reese’s Peanut Butter Lovers Cups, which have more peanut butter than standard Reese’s cups but still contain some chocolate and were first sold in 2019.

Hershey signed a five-year partnership with the U.S. Olympic Committee in 2015, supporting teams through the Rio 2016, PyeongChang 2018 and Tokyo 2020 Games, as an official sponsor and the confectionery partner of Team USA.

Its past campaigns featured athletes including gymnast Simone Biles and wrestler Jordan Burroughs in a “Hello From Home” campaign in 2016, and short-track speed skater Apolo Ohno in a 2018 campaign for the Hershey’s Gold bar