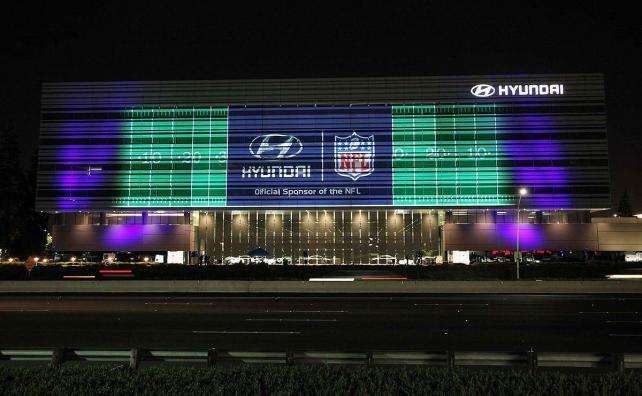 It was the day before the 2015 NFL draft in Chicago, and last-minute preparations were nearly complete for the announcement of a monster marketing deal: Hyundai Motor America's multiyear, multimillion-dollar sponsorship of the nation's most popular sports league.

Banners with the Hyundai and NFL logos were being unfurled. Contracts were being overnighted for final signatures. Dozens of Hyundai Tucson and Santa Fe crossovers were on-site for the April event, each with a special gold wrap to commemorate the 50th Super Bowl coming up in February 2016. Dave Zuchowski, then Hyundai Motor America's CEO, was on a plane to Chicago for the announcement.

For the NFL — still smarting from sponsor unease over its handling of domestic violence cases against its players — it was a crucial, big-dollar vote of corporate confidence, a replacement for General Motors, which dropped its sponsorship of the league after a nearly 15-year run. For Hyundai, it was a marketing coup: The NFL was the jewel of sports sponsorship, one the automaker had coveted for years because of the validation such a partnership could bring to a challenger brand.

Then came a devastating call from South Korea. Hyundai Motor Co., the parent company, was calling off the deal. No sponsorship was announced the next day. The gold-wrapped Hyundais were put away. Roger Goodell, the NFL's formidable commissioner, was furious. And those who had worked on the deal for months for Hyundai Motor America were stunned.

The two sides resurrected a deal two months later, but the ripple effects of that bobbled kickoff are still being felt today, insiders say, as Hyundai wrestles with the added cost of the sponsorship it secured, while it strains to sustain sales growth in a truck-dominated marketplace.

At the crux of the cancellation was Hyundai's Genesis brand. At the time of the 2015 NFL draft, Hyundai Motor Co. executives had yet to tell Hyundai Motor America that they planned to spin off Genesis as a separate luxury brand. That decision wasn't announced publicly until November. Because Hyundai Motor America never knew Genesis could have been a component of the negotiations, it never came up.

Also fueling concern was the cost of the original deal, which sources estimate would have been between $60 million and $90 million for four years. When Chung was told at the last minute about the price tag of a deal that didn't include Genesis — a brand near to his heart and pride — he backpedaled.

'That happens'
Eventually Hyundai Motor America coaxed an angry NFL back to the negotiating table, though the Genesis requirement gave the league significant new leverage over price. After four weeks of intense back-and-forth, a final agreement was signed, and announced on June 29, 2015. This time it included both Genesis and Hyundai in a four-year deal valued at between $100 million and $140 million, according to sources familiar with the negotiations.

Dean Evans, who came on board as Hyundai's chief marketing officer about a month after the final NFL deal was announced, put a positive spin on the events. "That happens every day around here, where people swoop in at the last minute and say, 'What about this value add? Did we think about that?' and the team gets together, we optimize and we say, 'Wow, let's do it,'" Evans told Automotive News.

Though he didn't negotiate the NFL agreement, Evans has had to deal with its impact, which, for better or worse, has defined Hyundai's marketing ambitions. For all of its cost, the NFL deal earns Hyundai little direct advertising exposure during NFL games on mainstream networks such as Fox, CBS and NBC. Instead, that opportunity is largely limited to promotional consideration on NFL-owned properties such as the NFL Network on cable TV and NFL.com.

A piece for Ford
Hyundai and its dealers are allowed to use the NFL logo in their promotions and the logos of all 32 NFL teams as long as they're shown as a set. Hyundai can also use the term "Super Bowl" during promotions for the championship game, driving as many as 100 million additional clicks to its online advertising, Evans estimated. (Ford, which signed on as the official truck sponsor of the NFL in September 2016, has similar rights.)

But to keep up with the Fords of the NFL media landscape, Hyundai has to spend tens of millions of dollars annually on top of its sponsorship agreement. And given the cost of being the official NFL brand, it has had a tough time keeping up with the game-day promotional spending by its rivals, especially with broadcasts originating from places such as Ford Field in Detroit, Nissan Stadium in Nashville and the Mercedes-Benz Superdome in New Orleans.

For its first Super Bowl as official NFL sponsor in 2016, Hyundai bought four advertising slots totaling three minutes of airtime, featuring top-dollar celebrities Kevin Hart and Ryan Reynolds and generating a strong positive response. This year, Hyundai sought to stand out with a postgame commercial filmed during the game.

The Super Bowl spots are just the marquee efforts. One insider estimated that the cost of other advertisements during game broadcasts could be $25 million to $30 million a year. "Do I wish I had more money to spend?" Evans said. "Yeah, because if you look at all the automotive brands alone that advertise during NFL games, I get my you-know-what handed to me because I don't have as big a checkbook."

This situation is echoed in Hyundai's sponsorship of the Genesis Open PGA tournament in Los Angeles. On top of the millions of dollars that arrangement costs Hyundai, the deal also requires Genesis to spend millions more each year on traditional media buys during other PGA events, one insider said.

What's more, after pushing for the more expansive and costly NFL deal, parent company Hyundai Motor Co. has been slow to increase Hyundai Motor America's marketing budget to allow it to keep up with other sponsorship opportunities.

This includes Hyundai's marketing campaign with NCAA football teams, which has dwindled to 11 for the upcoming season from 25 in 2013. Between $5 million and $10 million of support for several other smaller programs was cut altogether, one insider said. Meanwhile, Nissan has swooped in with a massive sponsorship campaign that covers 22 sports at 100 colleges and universities nationwide.

'Where Hyundai fits in'
Hyundai dealers were initially supportive of the NFL deal, particularly because it allowed them to use the 32 team logos in their stores. It also strengthened ties among dealerships in markets where Hyundai has direct sponsorships (at additional cost) of specific NFL teams: the Arizona Cardinals, Houston Texans, Los Angeles Rams, Miami Dolphins, Minnesota Vikings and Pittsburgh Steelers.

But that view has soured because the NFL deal doesn't get Hyundai much more than an obligation to spend more on advertising, which it can't do at the level dealers would like.

"You watch an NFL game, and you see a lot of different automotive brands advertising, and it's difficult to determine where Hyundai fits in all that," Andrew DiFeo, chairman of the Hyundai National Dealer Council told Automotive News. "I think it's just a reflection of [the fact that] the sponsorship was one monetary commitment and there needed to be another monetary commitment behind media weight, and that wasn't there."

Such a massive spend on the NFL has also put the squeeze on Evans' digital marketing push. A longtime digital evangelist going back to his days as Subaru's chief marketing officer, Evans has been bullish on what digital marketing and lead generation can do that more traditional advertising cannot.

At a meeting with dealers in February, Hyundai Motor America's interim CEO, Jerry Flannery, said the automaker would spend the year honing the "Make Things Better" message that it released during the 2016 Super Bowl, according to attendees, and boost its Tier 1 digital advertising efforts with an eye on increasing lead volumes for its retailers.

While dealers say the quantity of digital leads has increased under Evans' watch, the quality can be subpar, and that they often don't have the manpower to find the good ones. "The quality is subjective," DiFeo said. "Some dealers perform significantly better from a conversion rate than other dealers, but there is no question that there is a law of diminishing returns. You've got to take the approach that everybody's a buyer and give it your all with your people and your processes."

Regardless, dealers are keen not to abandon traditional media. "There's definitely a sentiment that we are maybe a little too focused on the digital side of advertising vs. some of the traditional media," DiFeo said.

But Evans is unapologetic about his focus on digital media, pointing out Hyundai spends 70 percent of its media dollars on TV advertising (including the NFL and PGA deals), and that more targeted efforts are needed to reach consumers who are more informed about vehicles and what they should pay for them.

"Some dealers believe that you put a TV commercial on TV and the customer comes running into the showroom," Evans said. "That doesn't happen anymore."

David Undercoffler is a reporter for Automotive News.

David Undercoffler
Follow View all articles by this author