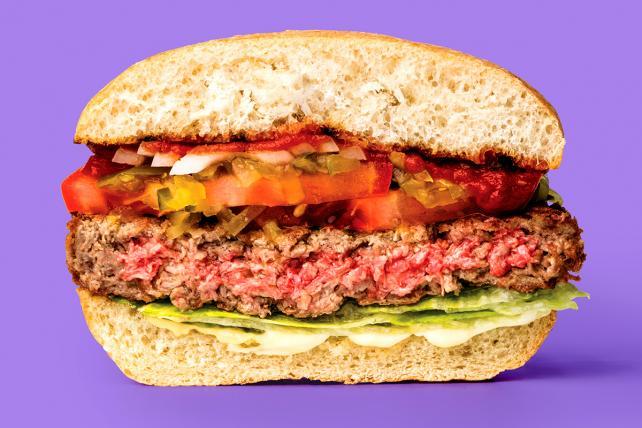 The ingredient, made from soybean roots and genetically engineered yeast, goes into vegetarian Impossible Burgers, which are available in a growing number of restaurants—even fast-food stalwart White Castle.

It contains heme (pronounced HEEM), a key part of red meat and a source of iron, which humans can't live without. Think of Brown's discovery as plant-based blood. Brown, 63, says it makes the Impossible Burger sizzle, smell and taste like real red meat.

The resemblance to beef is the Impossible Burger's claim to fame. It may also be its bane. Even though Impossible Foods is compliant with all regulations, the company is having the U.S. Food and Drug Administration review the product's safety in the interest of transparency. So far, the FDA says the company hasn't met the mark. The FDA said the plant-based heme is so new there needed to be more evidence before it will give its blessing. Impossible Foods says it tried again and is waiting for the FDA's response.

"This is a product that has great potential for society," said Tom Neltner, chemicals policy director for the Environmental Defense Fund. "We have to get the science right."

The heme molecule is also involved in another controversy. Studies have shown that steak lovers are at risk of colon cancer while chicken breast junkies aren't. Heme makes red meat red, so some researchers think it could be a culprit, said Robert Turesky, a professor at the University of Minnesota.

That kind of talk irritates Brown. In a long career, he's revealed truths about the AIDS virus, made the study of genomes easier and worked to tear down the paywall that separates research from the public. Stanford University gave him a lab to investigate whatever he wanted. But he quit that job, the "best in the world," he called it, to start Impossible Foods in 2011. He's certain his company got the science right.

On a recent afternoon at the company's Redwood City, California, offices, Brown walked into a conference room wearing purple socks, a black hoodie and a red T-shirt displaying the chemical structure of heme. On the table, he plopped down a thick stack of loose papers—reports on heme's possible link to cancer.

"Garbage science,'' he calls them.

A solution to the world's beef addiction is urgently needed. Animal agriculture eats up an astonishing 30 percent of the earth's land. Brown says he's tackling the problem with a burger that uses 95 percent less land and 75 percent less water than ground beef.

Investors have responded. Impossible Foods says it's raised almost $400 million from the likes of Bill Gates, Vinod Khosla, Google Ventures and Singapore's Temasek Holdings. That includes the closing earlier this month on $114 million of loans that can be converted to equity.

Fake meat will be one of the year's hottest food trends. An increasing number of flexitarians—people not looking to eat meat at every meal—are helping to drive interest, according to Rabobank. Sales of alternative proteins are dwarfed by the $49 billion red meat and chicken market, but they're expected to grow about 17 percent a year to $863 million in 2021, according to a CoBank estimate.

The company is interested in beating out meatless competitors, such as Savage River's Beyond Burger, which counts Leonardo DiCaprio and meat giant Tyson Foods as investors. But Brown's goal is bigger. He wants to replace beef.

And he wants the FDA's thumbs-up.

In other developed countries, companies have to get government approval before they can sell new products. By contrast, the U.S. has a rule called "generally recognized as safe," or GRAS, which allows the sale of foods containing novel ingredients without FDA approval as long as experts say the additives are safe. Impossible Foods convened a panel in 2014 and has been GRAS-certified ever since.

In 2014, when the company first went to the FDA for a review, which it didn't legally have to do, the agency said it needed more scientific evidence.

In its latest attempt to satisfy the FDA, Impossible Foods submitted more than 1,000 pages of test data to the government agency. The filing includes a study where rats were fed large amounts of its heme for 28 days. The panel of three food-safety experts again said it was safe.

The FDA says it's evaluating.

The FDA's initial reaction prompted some consumer and environmental groups to demand the company take its burgers off the market. Among them were The Friends of the Earth, ETC Group and Consumers Union.

"You consume literally thousands of different heme proteins in your diet every day, and none of them have been shown to have any toxicity whatever," Brown said. "There's no reason to think that we just happened to be really unlucky and picked the only heme protein ever found that has any harmful effects."

And while there's no evidence the heme molecule itself causes cancer, a March survey of studies from the World Health Organization's International Agency for Research on Cancer reported there's "strong evidence" that eating it can contribute to the formation of carcinogens in the gut. Impossible Foods disagrees with the finding, citing "the scientific and logical flaws in each of the studies."

Brown says that in taste tests, half of consumers prefer the Impossible Burger to a real one. The burger does look a bit like the beef version. Once you get your mouth around it, though, the differences are more apparent. Vegetarians who crave a taste of beef may be pleasantly surprised, but meat eaters won't be fooled.

Whether or not the Impossible Burger is the answer, beef certainly isn't, said Ricardo Salvador, director of the food and environment program at the Union of Concerned Scientists.

If Impossible Foods "is successful with what they're doing and people accept it, the environmental load they'll be removing is such that the benefits would be innumerable,'' Salvador said.

Brown says that it's not meat that people crave, it's heme. And cattle are a lousy heme-delivery system.

"The way to solve this big global problem is not by ordering people to change their diets, it's realizing that we're using the wrong technology," Brown said. "You can't make meat that satisfies the craving that meat-lovers have without heme. It's the magic ingredient.''