Inside Starbucks' New 'Coffee Wonderland' in Shanghai (Yes, They Really Call It That) | Ad Age
Skip to main content

Inside Starbucks' New 'Coffee Wonderland' in Shanghai (Yes, They Really Call It That) 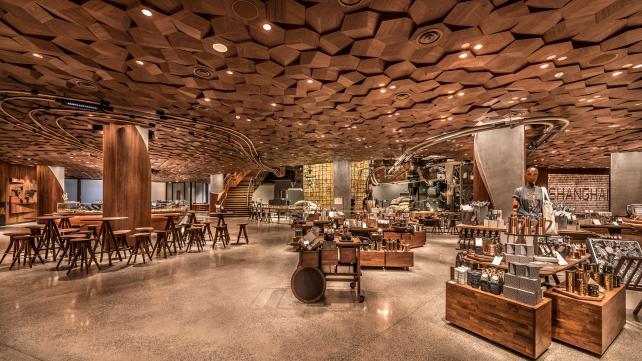 Inside the Starbucks Reserve Roastery in Shanghai.
Credit: Starbucks

The world's biggest Starbucks is opening this week in Shanghai. Without a drop of irony, founder Howard Schultz refers to it as a "coffee wonderland." And if such a thing exists, the new Shanghai shop is probably it.

The cavernous 30,000 square-foot location is the first Starbucks Reserve Roastery—a so-called experience center—outside the brand's hometown of Seattle. There's a two-story copper cask, a European-style bakery and augmented reality experiences sprinkled throughout, powered with tech from China's Alibaba Group. The ceiling, according to a news release, is made of "10,000 handmade wooden hexagon-shaped tiles, inspired by the locking of an espresso shot on an espresso machine." Reporters who got a preview Tuesday were given a wristband for entry, as though it was an exclusive nightclub.

China is no longer a simple market for Western food and beverage brands, and chains from McDonald's to Pizza Hut have spruced up their offerings to seem more up-market and trendy as they pursue China's growing middle class on its upward trajectory.

But Starbucks, which entered China 18 years ago, still sees remarkably strong growth in China, where many consumers view it as an aspirational brand. It had 8 percent same-store sales growth in the most recent quarter in China (compared to 2 percent in the U.S.) and it announced that it was buying out its joint venture partners in east China for about $1.3 billion. There are 3,000 Starbucks in China now. Starbucks China CEO Belinda Wong told reporters that a new one opens every 15 hours.

Starbucks has large scale in China, "and now it's getting a toe in the water to say 'We can take it to the next level, we can move into being a more experience-based brand,'" says Andrew Kuiler, CEO of The Silk Initiative, a China food-and-beverage strategic brand consultancy. In China, he says, "a lot of the more cut-through brand executions have a very dominant experiential component to them." 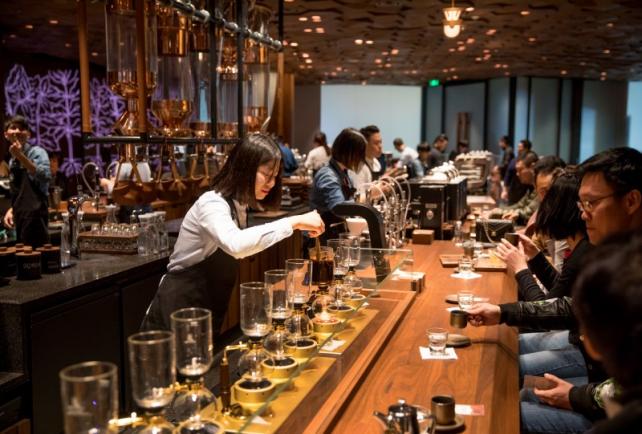 There are different coffee and tea bars scattered around the shop
Credit:
Starbucks

A new shop every 15 hours

Schultz and Starbucks CEO Kevin Johnson made the trip for the opening. "With over 3,000 stores, you might ask yourself, how much growth is there left for Starbucks in China?" asked Schultz. "We strongly believe, and we're committed to, building a long-term business in China that will be bigger, more powerful and more significant than our business in the U.S."

In the U.S., the company's largest market, there are roughly 14,000 Starbucks locations.

When Shanghai's Starbucks Reserve Roastery officially opens Wednesday, customers will find a "theater of coffee," where beans are roasted and sent in copper pipes to be packaged. There are also various coffee and tea bars, plus wine and craft beer for sale. One barista proposed an alcohol-tinged coffee cocktail called "The Melrose St.", which sells for about $8.75 and contains cold brew, bitters and a liquor-soaked Maraschino cherry. "It's Howard's favorite," the barista said.

Starbucks worked with Alibaba Group to provide the augmented reality experiences and some light explanations of coffee-making. People can use their mobile app for Alibaba's shopping platform, Taobao, to get an AR store tour. There's also pricey merch for sale, such as a wooly gray cap with a "Starbucks Reserve Roastery Shanghai" patch ($55.80) and a $90 coffee press.

The shop is located on central Nanjing West Road, in a neighborhood with shops including Gap, Sephora and Uniqlo. Across the street in an office building is a much more basic Starbucks, because there seems to be a Starbucks on every major street corner in town. "We have over 600 stores in Shanghai," Schultz said. "That's more stores than we have in New York, London, Los Angeles, anywhere."