J.C. Penney is returning to the Oscars for the 14th year in a row -- this time with seven spots and a second screen game to engage viewers during the broadcast. 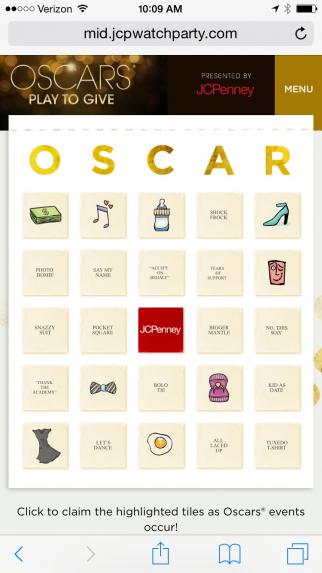 A sample card in J.C. Penney's 'Oscars Play to Give' game.

The game, called "Oscars Play to Give," is loaded with potential Academy Awards moments. When they happen live, users tap the squares that represent each moment to earn points and generate a donation from J.C. Penney to one of three charities: Share Our Strengths' No Kid Hungry campaign, Boys and Girls Club of America and DoSomething.org.

"With more and more people engaging online during live events, we were looking for a fun way to engage our customers and drum up some great support for our J.C. Penney charity partners," said a J.C. Penney spokeswoman, adding that the second screen game is a first for the retailer.

J.C. Penney is the official retail sponsor of the Academy Awards.

The six spots that will break during the Academy Awards broadcast on ABC carry on J.C. Penney's existing messaging with the tagline "when it fits, you feel it," but with a focus on style and fashion. The spots feature various private, national and exclusive brands, including Sephora, which J.C. Penney will plug for the first time on national TV since opening Sephora-branded shops in its stores in 2006.

The seventh spot of the night is a "Cinderella"-themed ad that will air during the red carpet pre-show on ABC as part of a deal with Disney to promote it's upcoming live-action film.

The push will kick off J.C. Penney's spring ad campaign, which also includes mailers with fashion tips, print ads in magazines like People, InStyle and Cosmopolitan during March and April, as well as social media, mobile and digital elements.

J.C. Penney worked with Doner on the TV spots, OMD on the media buying, EVB and Victors & Spoils on the lookbook, and The Marketing Arm on the game.