Why Jack Daniel's Tennessee Fire Launch is a Slow Burn

But the launch of Jack's second year-round flavored line extension, cinnamon-flavored Tennessee Fire, is being accompanied with decidedly less buzz. Bottles are only available in three states: Oregon, Tennessee and Pennsylvania. There are no glitzy TV ads. And the marketer is still evaluating whether to take it national.

Why the caution? It goes back to "being respectful of the Jack Daniel's trademark," said Casey Nelson, senior brand manager for the Jack Daniel's flavor portfolio. "The more you innovate around a certain idea, there are certain risks associated with that."

One concern is cannibalization, meaning that Fire could potentially steal significant sales from regular Jack and Jack Honey, rather than winning new consumers.

Mr. Nelson said Honey had a low cannibalization rate as it lured more females, African-Americans and Hispanics to the Jack franchise. But "there is certainly a higher risk for cannibalization any time you add a second flavor," he said. There are "examples that buck that trend," he said, referencing extensive modeling studies that Brown-Forman did. "And we want to understand where we fall."

Thus, the three-state rollout will allow for a deeper study of trends without the pricey investment of a national launch.

The goal is to grab a share of the cinnamon whiskey segment, which is surging as a trendy shot drink. The segment so far has been led by Fireball Cinnamon Whisky, which is owned by Sazerac Co. of Louisiana.

Mark D. Swartzberg, an analyst with Stifel, recently reported that Fireball controls roughly 80% of the cinnamon-flavored whiskey market. Among all whiskey brands, Fireball ranks No. 4 for sales at stores (not including bars), with 4% share and $67 million in sales, according to IRI data for the year-period ending Jan. 26. The Jack Daniel's megabrand is No. 1 with 12% share and $201 million in sales.

Millennial drinkers are driving Fireball's growth and "they've made it a trend," said Emily Pennington, editor of Wine & Spirits Daily. "But it's shocking to me how many of the older generations I see taking Fireball shots."

Jack's Tennessee Fire, she said, "is definitely aimed at Fireball." Asked about Jack's chances, she recalled that Jack was not the first brand with a honey flavor, but the brand ended up dominating that segment. So "I certainly think it has a chance to take a bite out of Fireball."

Tennessee Fire is made from Jack Daniel's Old No. 7 Whiskey and "naturally infused proprietary red hot cinnamon liqueur." Cinnamon whiskey "has a perceived challenge nature to it in that it's hot and spicy, but at the same time it's very easy to drink," Mr. Nelson said. 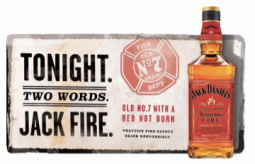 Tennessee Fire has mostly relied on social media and point-of-sale marketing. As bottles rolled out earlier this month, the brand encouraged fans to spread the news with the hashtag "#JackFire." In-store signage plugs the line extension as "Old No. 7 with a Red Hot Burn." The tagline is "Tonight. Two Words. Jack Fire."

Agencies working on the launch include Arnold Worldwide, Boston, for creative; FCB, Chicago, for below-the-line; and Code and Theory, New York, for social and digital.