Jerky Brands Double Down on Athletes in Advertising

Two jerky makers are taking different athletic approaches to try and stand out in an increasingly competitive snack category.

Oberto is beefing up its "little voice in the stomach" campaign that has featured Richard Sherman and Stephen A. Smith since 2014. On Tuesday, it is set to announce New England Patriots tight end Rob Gronkowski, San Francisco Giants right fielder Hunter Pence and motorsports star Travis Pastrana as its newest athletes in the campaign, which will keep using the tagline "You get out what you put in." 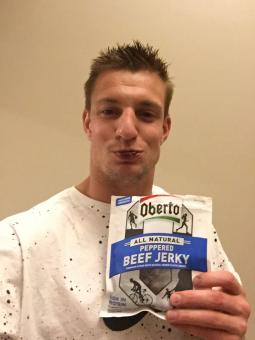 While the two brands say they are going after slightly different consumers, both target active people looking for protein-packed snacks and use athletes to tell the story.

David Lakey, senior VP-marketing, said Oberto positions itself differently from others in the industry, even if others use athletes.

"The athletic tie-ins of some other players is not central to their campaign, it's a secondary message. For us, it's the primary message," Mr. Lakey said.

He was hesitant to share too much about the new round of ads expected to appear beginning in March, but said Mr. Sherman and Mr. Gronkowski might appear together in some of the advertising.

Oberto is using TV, primarily during live sporting events, as well as digital, radio, social and events in its campaign. It is also becoming a North American sponsor and the official beef jerky of Nitro Circus, the action sports and entertainment touring show founded by Mr. Pastrano. The deal includes Nitro Circus creating stunts that incorporate the Oberto brand.

"This is really, for Krave, the first time we've ever done a fully integrated national campaign," said Rusti Porter, VP-marketing. "Obviously meat snacks is a hot category right now and we want to be the brand that consumers think of when they think of better-for-you and artisanal jerky."

She remembers when Krave had a "shoestring budget" as it tried to change people's perceptions of jerky and get them to try a more tender meat snack with different flavors. It turned to people with "amazing and inspirational" stories to help spread the word. Ms. Michaels and Mr. Davis were early investors in Krave, which was acquired by Hershey last year. 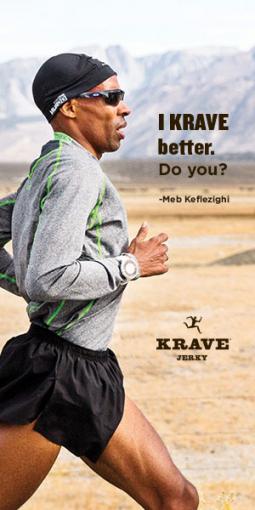 Krave's marketing budget is more than doubling for 2016 and Ms. Porter said Krave expects revenue will more than double in 2016. After the current campaign, the brand is gearing up for the Olympics as part of Hershey's role as an official sponsor of Team USA. Krave worked with LeadDog Marketing Group and Nurture Digital on its campaign.

While Oberto and Krave declined to provide specific sales figures, each is growing faster than the overall category.

U.S. sales of jerky rose 5.45% to nearly $1.48 billion in the 52 weeks ended Dec. 27, according to data across various retail channels from IRI, a Chicago-based market research firm. Oberto, a distant No. 2 branded jerky company behind Link Snacks, saw sales rise nearly 9% over that period. Krave's sales soared 62%, helped by increased exposure after Hershey bought the company.