Push Highlights Pajama Brand During Its Quiet Season
READ THIS NEXT
Outgoing General Mills global CMO Ivan Pollard on why he left, and what's next for him and the food giant 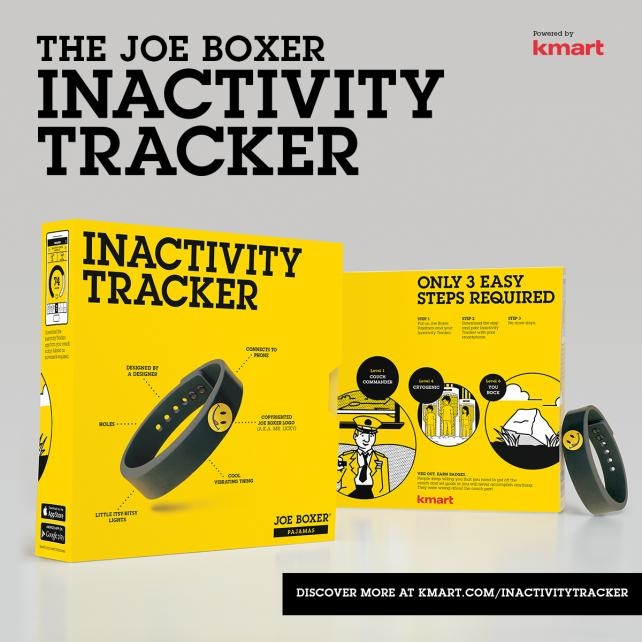 You've heard of the FitBit and other trackers that promote exercise and activity. Now there's a tracker that will reward you for doing absolutely nothing.

Kmart is tapping into the fitness tracker trend with an "inactivity tracker" meant to promote the retailer's Joe Boxer pajama brand.

Like the FitBit, the Inactivity Tracker connects to a mobile app, available on iOS and Android. Unlike other trackers, the app rewards users for laziness, or what it calls "chill time," rather than fitness, allowing them to reach levels like "Couch Commander," "Cryogenic" and "You Rock!" So people can feel better about binge watching Netflix's "Daredevil" and lounging on the couch instead of enjoying the sunny spring weather.

The effort, created by FCB in Chicago, puts Joe Boxer in the spotlight during a usually quiet season for the brand, which is known primarily for quirky holiday spots like "Show Your Joe."

"How do we extend the brand at another point during the year besides holiday?" said Jamie Stein, a spokeswoman for Kmart. "The whole idea is to turn the tracking trend on its ear. It plays off of Joe Boxer's irreverent brand personality really well."

The spoof on fitness tracking also matches the laid-back nature of the pajama brand. "It's about embracing that time to relax and enjoy doing nothing in your pajamas by Joe Boxer," said Ms. Stein.

The limited-edition device will be given out today as a free gift with purchase at Kmart's Astor Place location to the first 50 shoppers who buy select Joe Boxer pajamas. The retailer is also promoting the product with the hashtag "#chillhard" and will surprise some fans on social media with the wristband.

Rounding out the campaign is a 60-minute digital video of men lounging on recliners with a humorous play-by-play narration, as well as a content hub and public relations push.