Pax Labs, a company best known for making vaporizers, is rolling out a multimillion-dollar ad campaign called "Vaporize" to mark its debut in the e-cigarette industry. 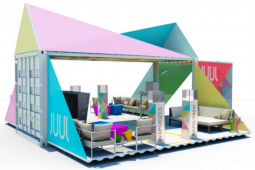 The company earlier this month broke a campaign for the new product called Juul, which stands out because it does not resemble a traditional e-cigarette. The company is breaking its first campaign for the USB-drive shaped brand with a brightly colored 12-unit billboard display that will loom over the heads of passersby in Times Square and the front spread of Vice magazine's July issue.

The push is set to run through the end of 2015 and most likely into 2016, and will be presented in multiple platforms. The company will also employ experiential and event marketing approaches, according to Richard Mumby, Pax's first chief marketing officer.

As part of the campaign, created by an internal team, Creative Director Steven Baillie, New York-based Grit and Canadian-based firm Cult Collective, the company will erect pop-up "Juul bars." The bars are set for various events and locations throughout the summer in Los Angeles, New York and the Hamptons.

Designed to convey simplicity, Juul comes packaged in a white box the size of a pack of cigarettes. Publications like Men's Fitness and Wired have branded the product as the "iPhone of e-cigs." The creators of Pax Labs, James Monsees and Adam Bowen, both graduated from Stanford's design program, the alma mater of many Apple designers.

Mr. Mumby said while other campaigns tend to be "overtly reliant on just the product," its effort features diverse 20-to-30-year-olds using the product. The ad's background is set against a design of various shades of yellow, blue and pink with photos of the young men and women using Juul, typically dressed for a night out. Mr. Mumby said they hoped the creative would have a "dynamic energy."

While Mr. Mumby and many others at Pax are new to the tobacco industry, he said Pax wants Juul to stand out by not appearing like a cigarette or comparing itself to one. "Combustible cigarettes have sort of captured the mindset of consumers, it's a very specific reference point that people have. Pretending to be that, probably isn't going to be received as well as the original," Mr. Mumby said.

The campaign comes just weeks after Pax secured approximately $47 million in venture fundraising, which will be used in part to expand Pax's media and marketing budgets.

According to an estimation reported by Reuters on June 10, the "vapor devices" industry is expected to reach a value in the U.S. market of $3.5 billion by the end of 2015. But advertising in the space has not lived up to expectations set when the category it first gained consumer attention. The industry is still somewhat in a state of limbo because of a lack of regulation.

The category has drawn the attention of the Center for Disease Control as critics charge some brands are aiming to draw in youth and non-smokers. The CDC's concerns revolve around adolescent e-cig use. There were 2.45 million adolescent users either in middle or high school in 2014, up from 780,000 in 2013, according to an April CDC report conducted in partnership with the FDA's Center for Tobacco Products.

Tim McAfee, director of the CDC's Office on Smoking and Health, said the increase "shows the power of 21st century marketing."

John Schachter, director of state communications for Campaign for Tobacco-Free Kids, expressed concern about the Juul campaign because of the youth of the men and women depicted in the campaign, especially when adjoined with the design. Mr. Schachter said the organization has noticed obvious trends that appeal to adolescents in e-cigarette campaigns such as celebrity endorsements, sponsorships and various flavors.

"We're seeing more and more irresponsible marketing of unregulated products such as e-cigarettes," Mr. Schachter wrote in a statement about the Juul campaign. "We are concerned any time a new product or new advertising campaign goes public regarding cigarettes and tobacco and their addictive nicotine."